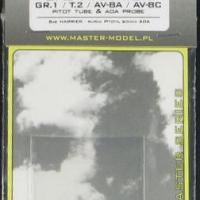 Even with all of the modern molding technology available now, plastic has its limits as to how thin and how small details can be made and still be moldable. Pitot tubes and AOA (Angle of Attack) sensors are where this shows the most on scale model kits. Take a kit that is nearing 30 years old, and it becomes grossly apparent that something must be done to improve these details, and for the most part these small details can make an old school model seem new again.

This all becomes apparent when looking at the old Monogram AV-8A / GR.1 labeled simply as “Hawker Harrier” on the box. It is still the only game in town for an early Harrier (excluding Sea Harriers), but actually isn’t a bad kit. It’s overall quite accurate in shape, with the major details done quite well. The pitot tube, on the other hand, is a scale 2” diameter pole sticking out the front end – not only grossly over-scale, but also soft in shape and begging to be broken by the wayward hand. Master Model comes to the rescue with a very affordable and effective replacement, plus a bonus AOA sensor.

Not much to describe here, except do be careful when extracting your parts! The AOA sensor is very small and can easily get lost in the nether regions of the workbench. Both are turned from solid brass, and are very detailed and to scale.

Basically, the probe is a direct replacement for the kit part, so simply use it instead of the plastic one. The AOA will require a small hole be drilled, then the part carefully inserted. I have included a photo showing its location. Instructions included with the set also cover placement.

I personally have yet to have a Master Model set that I didn’t find an immediate use for, and see an obvious improvement to the kit parts. For less than $10 in most cases, in many ways the end result is well worth the added expense. For an old Monogram kit like this, which can be had for around $10 itself, adding a little extra takes this old kit and gives it a solid push toward a 21st Century appearance in detail. I highly recommend this set for your next early Harrier build!