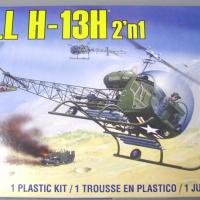 One more excellent re- release from Revell; the copyright date is 1994 on this one, and I remember being able to purchase it for about the same price as it is being offered today. Thanks to Revell for providing IPMS USA this review item and the opportunity to build this kit again without collector prices!

This is a basic kit; originally released as a MASH bird, with a co-release of the MASH cast in another kit, targeted for the TV audiences. It is an accurate 1/32 kit of a late H-13; earlier versions had a single flat tank with non-tip weighted main rotor blades… Later ones had more power, twin fuel tanks, and weighted rotors to maintain rotor energy during autorotation. Up front, this is not a simple build.

The “2 in 1” theme refers to the options; gunship, medivac, and standard transport/observation bird. The good thing is the main tail boom frame is provided as a separate injected mold item; my only complaint is the tubing has inner flat facets rather than straight tubes. Same for the rest of the kit; I spent a lot of time scraping mold misalignment, but it wasn’t that bad. As to appearance, after all, this was one of the first mass-produced helicopters, and as such was a forest of welded tubes and fishmouth attachment nightmares for the Bell Company. However, this strong truss structure made for a rigid, lightweight, and effective airframe.

(Historical note: The H-13 ranks right up there with the UH-1 “Huey” as a “most recognizable” helicopter. Frequently soundtracks for movies used the H-13 engine and rotor noise as a generic helicopter sound… MASH H-13 soundtracks are different from Huey's, as properly recorded in “The Deerhunter”© and “The Green Berets”© movies… a minor, annoying, and highly noticeable difference on two-bladed rotorcraft sound for us rotorheads)

Assembly starts with that boom; be careful and take your time, because the rest of the model can be noticeably out of rig if you don’t. The engine detail is added, which is a very accurate rendition of the Lycoming VO-345 with cooling fan. Again, careful assembly with the engine mount is required; the drawings need to be studied to see how it all fits together. The skid assembly is added, as is the tail rotor protective hoop and various other details such as batteries, etc. are put in place. It can be a bit frustrating but take your time. There are pitch/yaw control swashplates for the main rotor gearbox, but no pushrods. Add them if you have references; otherwise this model would crash!

Next, the cockpit and forward fuselage section are assembled. I left off the clear bubble until the last to avoid any messy fingerprints, glue, etc. The aft bulkhead is well detailed, and the seat assembly fits perfectly. The instrument panel tower assembly instruments can be either brush painted or use a decal. I opted for the decal as a review item; it fit perfectly and snuggled in on the panel detail when Solvaset® was used.

Control sticks, correct cyclic, and rudder pedals are all there, and add just enough detail. I opted to install the pilot figure; it’s well sculpted, and fits fine. here are no lap belts, but that can be corrected by the builder using belts of choice.

The tail rotor is simplified; I just cemented mine in place. The rotor is well detailed, and even has decals for the balancing records and manufacturer. The fly bar and pitch links are well detailed and hold everything in place. After a few bits and pieces were added, (searchlight, tail rotor drive shaft, engine exhausts, etc.) it was time to finish up!

I went for the difficult paint scheme, because most of the all olive drab birds didn’t appeal to me. Markings are the same as the original kit; all Army. One slick, one gunship with the experimental .30 cal. and 2.75” rocket tubes, the “world famous” MASH Medivac” version, or an arctic/desert scheme with high visibility markings. I highly recommend if you choose this scheme that you use a good lacquer white primer, as the green plastic color “Leeches” through the paint if you don’t. Hard lesson learned, that cost a week of paint curing time on a “re-do”. (PLEASE go back to gray for all parts, manufacturers!) I had painted the boom assemblies as separate parts, assembling the upper frame before installing the batteries and internal details. It made it a lot easier to paint the white boom and details, with touch-up along the way. Rustoleum® lacquer primer and gloss white worked great (after the previous false start); Tamiya orange, bright yellow, red and black for the rest.

The decal sheet was fantastic; same as the original sheet, and everything snuggled down. In the end, a great build, earning an 8 of 10 for ease of construction, and 10 of 10 for subject!

What's in the box