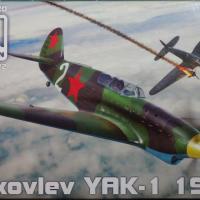 Brengun, based in the Czech Republic, is known for producing a range of photo-etched and resin accessories for airplane models. They also produce a small number of 1/72nd and 1/144th aircraft model sets. One of their latest airplane kits is the Yakovlev Yak-1, Year 1941.

The Yak-1 was a maneuverable, fast and well-armed fighter developed by the Soviet air force in 1940. At the start of the Operation Barbarossa, the Soviets had about 500 Yak-1’s built, but just less than 100 were combat operational. TheYak-1 had a steel frame with wooden wings and composite fuselage, it was easy to maintain and fairly reliable and proved to be an excellent base for further developments. At altitudes, below 4,000 feet, was where the Yak-1 performed the best and was strong competition, and in some cases, more than a match for its German foes.

The kit comes in a side opening box, with full color cover art of a Yak-1 in action on the front and painting and decal instructions for four different aircraft on the back. The painting instructions provide a four-sided view for each aircraft option. I choose to go with the plane featured on the cover art, and the painting instructions identify it as a plane fighting over Leningrad in the Spring of 1942. The kit comes on 3 grey plastic sprues, with a small sheet of photo-etch, one clear sprue, and two sets of resin parts for the tires and radiator details. The kit also includes a small set of decals to make one of the four planes shown on the back of the box.

Construction starts, as usual, in the cockpit. This has to be one of the most complex cockpits I’ve built in 72nd scale. It’s comprised of 18 parts with both photo-etch and plastic, not including the two part gun-sight that mounts on the inside of the front canopy piece. The seat is especially detailed, with two tiny pieces of photo-etch providing all the support for the seat, and an incredibly thin piece of plastic representing the tubular seat frame for the back of seat. Much to my surprise it all went together without much fuss, and was a good fit with the end result being more solid than I was expecting. Pay close attention to the three steps of instructions, which are only exploded diagrams of the seats. One notable item missing from the highly detailed seat is belts, so you’ll either need to scratch build some, or leave them off entirely.

The larger pieces, such as the fuselage halves, and wings, are molded very thin, so conduct your clean up with care. The fuselage went together fine and there are some nice additions to the cockpit sides that add even further detail to that area. The upper and lower cowlings are provided as separate pieces, with a resin insert making the radiator details up front. I needed to do some small seam cleanup around the upper cowling and fuselage, and along the bottom of the fuselage aft of the wings, but nothing overwhelming.

The wing root connection presents problems. The modeler has the choice of dealing with a large gap at the front of the wings if you match with wings to the wing root on the fuselage top and bottom, or dealing with a large step at the wing root if you follow the instructions and put the wing together before attaching it to the fuselage. I followed the instructions and had to deal with the latter. Either way the choice is yours. Not the end of the world and not totally unexpected from some a short run kit.

The lower wings get the addition of 6 large photo-etch pieces providing some nice panel and rivet details to the bottom of the wing. Not sure how appreciated those additions are in the end, since they are on a part of the kit not normally featured, or displayed, but they fit well. The wheel wells have nice details too, but just when you think you’re out of the woods, you get to put the landing gear together. Each leg consists of four pieces of about the smallest, thinnest sprue in the kit. The modeler will need to pay close attention to the assembly instructions, again just exploded diagrams, because these can be tricky to get right. The end result is a pair of nicely detailed landing gear, but take your time getting there. The gear doors are in photo-etch and again have nicely detail rivets and panels.

The decals provided are excellent to work with and finish very well with just a few drops of solvent.

This kit will be a welcome addition to any VVS enthusiast, especially given the lack of recent offerings of the early Yak-1 model in 1/72. The few shortcomings, wing root fit and a lack of belts in an otherwise excellently detailed cockpit, are easily overcome by the extra details provided and the general ease of build. I would recommend this kit for a moderately experienced builder, it’s challenging but the end result is well worth the effort.

Thanks to Hauler-Brengun, and the IPMS USA for this review model.