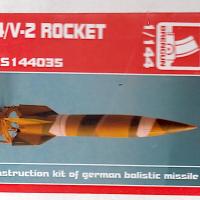 The V-2 was the first operational ballistic missile. It didn’t use an aiming system as such but was launched in the exact direction of the target. The engine was cut off when the missile was at the correct speed and altitude to allow it to coast to the target. The 2150-pound warhead could do a large amount of damage, and, unlike the V-1 there was no way to intercept a V-2. A V-2 was also the first vehicle to go into outer space, reaching an altitude of 100 km. (62 miles).

The V-2 was a “vengeance” weapon, to answer the Allied bombing of German cities. The main targets were London, Antwerp and Liege. Over 3000 V-2s were launched against these cities.

This kit is mostly resin, with some PE details for the launch stand.

Building the rocket is fairly finicky but not difficult. The rocket body is removed from the pour block, the fins are cut off the sprue, and the fins are attached to the rocket.

I used a fairly large saw with fine teeth to separate the rocket body. The connection between the pour block and the body is easy to see, easy to cut, and the cut is hidden under the model when it’s complete.

I cut the fins from the resin sprue with a #11 blade. I use a scalpel, but an X-Acto would work as well.

Once the fins were cleaned up, I glued them to the rocket. There was a small amount of bend in a couple of the fins. I took care of this by gluing the bottom end of the fin to the rocket, then gently bending the fin until it was pretty close to straight. A touch of CA glue, a bit of alignment and a touch of accelerator made the fins acceptably straight.

When I finished gluing the fins on, I had to use a bit of putty along the joints.

The launcher was more complex and time consuming than the rocket. There are 4 vertical legs which go between the exhaust deflector and the missile mounting ring. Each of these has 2 photoetch parts. I had some trouble figuring out where PE parts 3 and 5 lined up on the supports. The instructions are not very detailed.

The legs attach to the corners of the deflector and the missile support ring. There are 4 resin feet which attach to the bottoms of the legs.

Once I had the legs attached to the deflector and the support ring, I had to do some adjustment by cutting and sanding to get the launcher even, so the rocket would sit vertically.

The missile paint scheme I used is the late war one, overall medium green, with a white stripe at the base of the warhead. I painted the nose area white, put on a mask using .7mm Tamiya tape, and painted the rest of the missile RLM 71.

The only thing left to do after painting was mount the missile to the launch stand. Everything lined up pretty well, and a little CA on each fin worked fine.

Recommended. The finished product looks good, it wasn’t a difficult build, and it certainly fills a spot in my World War II weapons shelf. If you’re interested in the Wehrmacht, Werner von Braun, Guided Missiles, or space history, this kit will fit your collection.

Many thanks to Brengun for this excellent kit, and to IPMS/USA for the chance to build it.