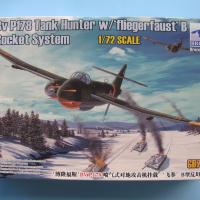 Whether you are interested in German paper projects of World War 2, a fan of Luftwaffe ’46 planes, or just a builder of unique aircraft, allow me to direct your attention to this recent release from Bronco Models. The relatively low parts count (57 in all) allows for a quick build for modelers with only limited experience. The only challenge may be a few small items, but these are not too daunting with a good pair of tweezers. The beauty of a kit like this is that you cannot go wrong with any paint scheme or markings that you choose, as no one will ever have a photo of the real thing to prove you wrong.

Blohm and Voss created the asymmetric BV-141 reconnaissance plane, first flown in 1940, which would be the start of the innovation that would lead to the design of the P178. Although none were built, the P178 was to be 10.8 meters (35 feet, 5 ¼ inches) long, with a 12 meter (39 feet, 4 ½ inches) wingspan, and would have been powered by the Jumo 004B engine. The fliegerfaust (pilot fist) was a 20mm, multi-barreled rocket launcher that resembles the bazookas of the time. Not developed until late during WWII, the weapon saw limited use due to range restrictions, which was less than the 500 meters thought to be possible. The A model was comprised of four barrels, where the B model sported nine. There is debate as to whether the weapon fired four projectiles, had a time delay, then launched the remaining five, or if each projectile fired after a time delay following the predecessor.

Upon opening the box for this kit, the builder will find 53 light gray plastic parts spread across five sprues, a clear sprue with four parts, and a single clear stand for the rear of the plane, as it is challenging to keep it from being a tail-sitter. There are two decal sheets. The larger one contains most of the items needed, and the smaller has ten decals for markings specific to this release. The instructions are printed in a seven-page color manual that provides the building directions on the centerfold pages only. The additional pages provide a short biography on the plane, color suggestions (for Mr. Hobby, Hobby Color, Humbrol, and Tamiya paints), a parts list (sprue drawings), and two pages of decal and color guides for two aircraft (one in Luftwaffe service, the other from the Royal Air Force of Romania).

As far as construction goes, I did have an issue with the fuselage seams, and although I thought that I had fixed it with Vallejo putty and wet sanding, it reared its ugly head during the painting process. The directions in step three recommend adding 10 grams of weight to the cockpit area, but there is no room to accomplish this. I placed a ¼ ounce weight behind the cockpit wall, and added small round fishing weights to the front of the fuselage, and two more in the front of the engine housing; this still lead to a tail-sitter. Aside from those items, most of the fits were good, and the level of detail was reasonable with the fliegerfaust launchers being very well done.

I painted my P178 using Model Master Acryl RLM 02 and RLM 76 along with Aero Master Enamel RLM 82, and Vallejo Dark Rubber and Silver Plate. I applied Alclad II Klear Kote prior to adding decals, and Light Sheen after the decals had set.

My hits for this kit are the unique subjects of the plane and weapons system, and the overall quality of the kit itself. The two marking options are nice, and there are additional decals if you decide to make up your own scheme, as I did. I also like parts being provided to allow the canopy to be shown open or closed.

My misses would be that I had more than one decal break after coming in contact with water. Specifically, a cross divided into four separate 90-degree angles, at which point I turned to aftermarket decals for the fuselage crosses and swastikas. The clear parts are not cloudy, but they are not very clear either. As this kit was previously released in different versions, I found that the one-piece bomb bay cover for this version did not fit as cleanly as I would have liked.

In the end, I would recommend this kit to those who enjoy late-war designs of the Luftwaffe, whether they were constructed or not. The kit goes together reasonably well, and the low parts count allows for a quick build, just in case you have not experienced one of those in a while.