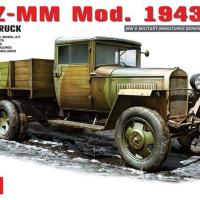 History – The GAZ Model 1943 Cargo Truck was based on the original GAZ-AA and, due to material shortages caused by the war, incorporated several metal and miscellaneous components changes. The vehicle was equipped with a more powerful 50 HP engine, simplified cab, the right headlamp was omitted, and brakes were fitted to the rear wheels only. Wood doors were added to the cab to improve driver comfort during the harsh winters.

Box Contents – The box contains 360 parts on 23 sprues. The tires are multi-part sandwiches that are included on seven of those sprues. A small and quite delicate PE fret is included, as well as two seated figures. There are no decals or markings included. The parts are crisply molded and include some rather rich detail. Many parts are quite small, more like ultra petite, and therefore a good deal of care will be required to remove the individual parts from the sprue without damage.

The instructions are in book form, with thirty-eight construction steps required. A very nice color picture of the vehicle is included on the box top and the front cover of the instructions booklet. Three vehicles and the two figures are shown in full color on the back cover page, and also included is a list of paint manufacturers and recommended colors.

Construction – First step: study the instructions. Second step: do it again! Each construction step is shown in exploded views with the required parts denoted by number. I went through the instructions at least a half dozen times and planned the work. I realized right off that most, if not all, of the sub assemblies would have to be painted before everything is finally brought together for the finished model (or so I thought!!).

The first three steps are dedicated to the engine construction. There are twenty parts to this first sub-assembly. Several of the mounting locations are merely dimples or micro-dimples in the surface of the receiving surface. The instructions are sometime a bit vague in the alignment of many of the parts.

The tires and wheels assembly take a different approach than found in other kits. Each tire is made up from seven thin plastic wafers: three for the outside and four for the inside, with the wheel trapped between the two halves. Step 9 is a bit confusing as it shows the assembly of a wheel and tire, but shows no count for how many are required. However, in step 15 four of the wheels/tire assembly using wheel part Cb1 and in step 16 two of the wheels/tire assembly using wheel part Cc1 are required. Studying the instructions beforehand will be important for a proper build. The end result is fairly realistic tread pattern. Depicting worn tires will required a bit of a knock down of the tread pattern with a sanding pad, if so desired.

The assembly of the frame involves many small and delicate parts. Take care to make certain that everything remains square and true, otherwise disaster lurks in the following steps. The fit of the rear leaf spring assembly struck me as potentially very weak. The mount consisted of two shallow dimples and corresponding nubs. This would never hold up when handling the model during the subsequent construction steps. I inserted a 1/8” length of .030” by .060” strip styrene between the frame and leaf spring to further reinforce the two tiny attachment points as shown in the instructions. Once step 6 was completed, I allowed all the joints to thoroughly dry overnight before moving on to the next step.

Steps 7 through 21 address the remainder of the chassis and include the installation of the cab floor, seat, and firewall. The mounting brackets for the running boards proved to be a bit troublesome and were quite fragile. I broke two, repaired one, and gave up looking for the other broken part. Handling the model became a challenge to avoid breaking anything else.

Fitting the remainder of the cab involves several parts that require proper alignment. I managed to place the fender a bit too far back, and the cross strut (part A98) just barely fit. The mounts for the headlight and horn were just too delicate, and I replaced them with brass rod, bent to match the kit parts. The hood may be posed open to display the motor.

The simulated wood frame bed was the easiest part of the build and finished off the work. The truck bed and door surfaces have a delicate wood grain pattern that will look very nice if weathered properly.

This kit is for the experienced builder. Many of the parts are small and delicate, and a great deal of care is required to remove the parts from the sprue. I generally used a fine razor saw to cut the attachment points, and carefully cleaned the burr with a sanding stick or new hobby knife blade. I did manage to break a few of the ultra fine parts and replaced them with styrene rod or brass wire.

In some instances, the mounting of parts uses too small of attachment points to make for a sturdy installation. Also, the directions are somewhat vague in where parts are to be fitted, and some of the attachment points are less than adequate. Often times, several small parts are used to make up a detail when (in my opinion) one larger part would have been satisfactory and might have eliminated some of the fit issues I discovered. The correct alignment of parts is often very critical for the installation of part further along in the construction, and gauging that alignment is quite challenging.

I think it is really great that MiniArt has provided this vehicle for the modeling community. There is a wealth of detail in this kit. Planning the work, studying the instructions carefully, and taking one’s time to complete each steps will result in a rewarding model. The kit assembly basically resembles the construction of an actual 1:1 vehicle, except none of the parts are bolted together.

I wish to thank MRC Academy and IPMS/USA for the opportunity to review this product. This kit is recommended for the skilled or experienced builder with plenty of patience.