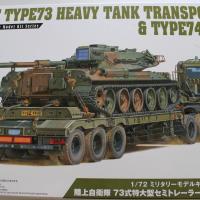 The Isuzu Type 73 Heavy Truck, is a Japanese work horse tactical truck. It serves in a multitude of rolls throughout the Japanese Armed Services. This kit includes an Isuzu Type 73 Heavy Truck, a Tank Transporter flatbed trailer and a Type 74 Tank. There are a couple of options for displaying the model: you can display the ramps down with the tank driving up and the feet down or with the tank on the trailer and the ramps stowed. There are also two boxings of this kit, with and without the Type 74 tank.

The box contains five sprue trees molded in hard dark green plastic, one clear sprue, a short length of vinyl tubing, and a separately molded truck cab for the truck and trailer. It also includes five more trees, separate hull pieces, and vinyl tracks for the tank. The parts are separated into several large bags, one seems to be for the truck and the others for the trailer, tank and other details. For the truck and trailer it is exactly like the PAC-3 kit, the parts are very well molded with little to no flash. There are a fair number of mold lines and sink marks on some of the parts, but Aoshima did a great job in making sure the sink marks were hidden and the mold lines are easy to sand and remove. Unfortunately, the same is not quite true of the tank kit. It is obviously a re-boxing of a much older kit and it does not quite measure up to the quality of the rest of the kit. There were issues with fit, flash, warping and really bad sink marks. Like the PAC-3 Patriot release the packaging caused a few small issues but on this example there were no broken parts or parts missing from the trees.

Just like on the PAC-3 kit, the construction starts with the nicely detailed Type 73 Truck. The construction progressed very quickly, within 3 hours I had managed to assemble all of the main subassemblies for painting. The fit for most of the kit parts was great and despite the small scale the detail was quite good. Aoshima did a great job of modeling tiny interior details, including a great diamond pattern on the trucks horizontal services, tiny reflective lights, and a myriad of other tiny details. The interior of the cab is shown below and Aoshima included a nice decal that really dresses up the gauges.

I did have a few minor fit issues but as with the sink marks and the mold lines, these were placed so that they were easy to fix or they would be hidden. The first fit problem was the back side of parts 12 and 13 which make up the jerry cans and rack. The backs of the cans fit into the three sided main piece but there is a large gap. I did not feel that this needed to be filled because the back of the jerry cans is up against a large tool box. I also had some difficulty with the tires. They are modeled in two pieces with the rim and inboard part of the tire as one piece and the rest of the tire as a separate piece. The advantage to this is it makes painting the tires and rims much easier. However, there are a couple of issues with the two piece wheels. First the fit is not great, leaving a gap on the inboard side of the trailer tires and front truck tires. This is mostly not a problem because the trailer tires are placed in a way that the gaps are hidden and the two front truck tires are easy to fill and sand. Also, upon final assembly, I noticed that the truck and trailer seem to a little warped, not all of the wheels touch the ground in the way that they should. This could be due to construction error but I assembled the kit the same way last time and had no issues. With minor pressure, both the truck and trailer straighten out enough to work.

The last thing to assemble is the Type 74 Tank. As I mentioned earlier I had a number of issues with this part of the build. The moldings seems to be much older than the rest of the kit, so there is plenty of flash and a couple of small warped pieces. I also had a gap where the two parts of the turret met and the same thing along the front glacis plate where it joins the lower hull. I had some more fit problems with the exhaust and most of the attachments to the turret, they were molded flat and attach to a curved service. All of the fit issues are minor and were easily rectified with a little filler and Mr. Surfacer 1000. The only issues that I couldn’t really see how to correct easily is with the IR light, it has a few deep sink marks in all of the parts. Unfortunately, the sink marks are all placed on the outside of the unit with the details, rather than on the inside. I didn’t see any way to fix them without losing a lot of detail. The trailing arms are nicely molded in at the correct height, so setting the wheels up correctly was a breeze. My final issue with the tank was with the tracks. They are the older type of vinyl that will not respond to any of the usual glues, I used a small soldering iron to melt the pins. It is also slightly too wide for the drive sprocket and slightly too long in general.

Once I had the major subassemblies finished I moved on to painting. All of the paint call outs are for Mr. Color and Mr. Hobby paints. Although the instructions have been updated to include the pages for the tank and trailer, the paint reference sheet has not been changed. Not all of the paint call outs in the instructions are included in the reference table. You will have to refer to the box to see what the paint call outs are referencing. One change from the original instructions for the PAC-3 kit is the primary color call outs. The only call outs mentioned are for a specific new Mr. Hobby JSDF color set. The set itself is not mentioned only the colors in it, which are not sold separately. I prefer to spray Tamiya acrylics so I chose XF-59 NATO Black for the tires and under surfaces, XF-67 NATO Green for the upper surfaces and XF-68 for the tank camouflage.

Once painting was completed it was time to add the decals. The kit contains a large decal sheet that contains a ton of tiny stencils, mostly for making your own markings or license plates. The decals are well produced, in great register and performed perfectly over a coat of Future. The decals even include a few beautifully produced placards for the trailer. The final part of the project is to run the PVC hoses for the air lines to the trailer. The PVC tubing is very flexible, attached well with super glue and was very easy to work with. They add a very nice touch to the trailer and are much easier to work with than most of the PVC tubing that I’ve used in larger scale kits. My only issue is that the PVC tubing seems a little large for the scale to my eye.

Overall this is a great little kit. It builds up quickly and fits really well. The Type 73 truck and trailer are objectively better kits than the Type 74 tank but it is a much older molding. It still builds up to a nice little tank with some basic modeling skills and I really like the idea of including the load for the transporter in the boxing, it is a really nice touch. Both kits seem to be fairly accurate and the multiple display options are very cool. I really enjoyed working on this kit and I recommend it for anyone that likes modern armor. My thanks to Dragon Models USA and IPMS for giving me the opportunity to review this kit.