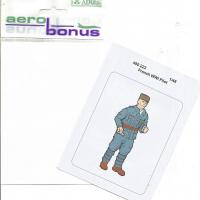 In keeping with other figures that are offered by AeroBonus, the figure consists of a head, two arms, and a body. This “kit” consists of four parts, all attached to a resin runner. Looking at the accompanying images there are two rectangular “partitions” also attached on either end of the runner. These are not parts to be added to the figure. They serve as “safety” barriers to prevent damage to the four body parts. Removal of these two barriers with a razor saw will make it much easier to cut the kit parts away from the runner. The arms and head are quite small, and it is wise to exercise some caution when removing them from the runner “lest ye old Carpet Monster” attempts to abscond with them. Do not ask me how I know.

Figure painters have taught me to drill a hole in the heel of a boot and to insert a wire to hold the figure steady while painting. In this case, I was unable to place the hole in a boot heel. Instead, I glued the figure onto a small piece of spare styrene sheet. It does not take much effort to remove that sheet from the bottom of the shoes once the figure is completed, either with a nipper or with some gentle sanding.

As with a previous AeroBonus figure that I reviewed, you will find that there is a very thin “sheet” of flash stretched between the legs. It is no difficulty to remove it quickly and cleanly with the edge of an X-Acto blade.

The arms fit well onto the shoulders, but I did find that I had not cleared the contact areas on the arm or shoulder and filled the resulting tiny seam with some super glue. The glue was given time to set up and then was sanded very gently until the seam line disappeared.

AeroBonus, in my view, did an excellent job molding “detail” onto the figure. There is plenty of “folding” on the pants and jacket so that one can “shadow” and “highlight” the details to give the figure as sense of “depth” and realism. Please note that I am very much an amateur figure painter, and when studied closely by those who are more adept than I, the faults seen are mine. In the hands of good-to-superior painters, these figures will be a stunning addition to any diorama or scene featuring a French WW I Pilot.

As with other AeroBonus Figures, this item has a paint guide included in the product package. On that same instruction sheet, AeroBonus indicates that this figure can be used with any French aircraft used during WW1. AeroBonus also suggests that there are two other French pilot figures that could accompany this item in a diorama or display. Those items are AB 480 221 and AB 480 222. The uniforms and clothing are distinct for each of these figures, as is the “pose” for each.

This kit is highly recommended due to its detail, quality of molding, and helpful instructions. Thanks to Aires AeroBonus for providing a sample kit for review by IPMS/USA.