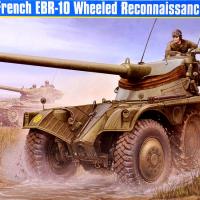 If ever there was proof that we are currently in a “gold age of modeling,” it is the release of models such as the one under review today. While produced in fairly large numbers (1200+), this French post-WW2 wheeled armored reconnaissance vehicle didn’t see widespread use outside the French Army. As far as I can determine, the only other military units to employ this vehicle were the Armed Forces of Portugal. Yet, despite this, here we have a state-of-the-art injection molded plastic kit of the subject!

Hobby Boss’ (Panhard) EBR-10 kit consists of over 330 well-detailed injection-molded plastic parts, contained on 10 tan colored sprues of various sizes. Along with the plastic parts come 8 “rubber” tires, a fret of photo etched brass parts, a small sheet of decals, and a 12-page instruction booklet. The modeler is forced to utilize the PE parts, since there are no plastic alternative parts contained within the kit as there are in some other manufacturers’ products.

The plastic used by Hobby Boss presented no problems using my favorite hobby glue, Tamiya’s green-topped bottle of liquid cement. The parts as stated above are well detailed and have no flash present anywhere. Ejector pin marks are kept to a minimum, and none appeared in places that could be seen once the model was fully assembled. The instruction sheet, broken down into 11 steps, was clearly produced and easy to understand. The only error I discovered occurs in Step 3, part of the suspension construction sequences. Parts B11 and B12 are listed as being “front” and “rear” units that attach either side of the main vehicle hull. However, when I test fitted these, they seemed to me to require that one of each piece, B11 and B12, go on either side of the hull. But double check my sequence vs. that laid out in the instructions and see if you agree with me.

I am not a big fan of rubber tires in models for a number of reasons, and these were present in this kit. Firstly, the molding lines that exist on any piece of model kit that comes out of a multi piece injection mold are extremely difficult to remove from “rubber” pieces. Scraping doesn’t work, nor does sanding work particularly well. Thankfully, the mold lines can be somewhat hidden on the Hobby Boss rubber parts. The second problem is fit: the rubber tires did not fit particularly well to their injection plastic hub parts. As such, they tend to move about once assembled. In hindsight, two alternative solutions could be tried in an attempt to solve this issue. Solution 1: use very thin super glue, in an attempt to fix the parts in place so they don’t move around. This, of course, leaves a paint masking issue, as the injection plastic hub detail will need painting, while the rubber tires will not. Solution 2: attempt to put a spacer between the two-piece wheel hub units in order to widen them, and hopefully this will solve the problem of movement. These spacers could easily be cut from Evergreen sheet plastic, using a circle template.

However, there is a third problem that exists specifically with this kit when it comes to the employment of rubberized parts for the wheels. The EBR-10 had eight wheels, with the front and rear pairs being standard pneumatic rubber tires. Thus, the rubberized parts are technically fine to use here. However, the two sets of inboard tires, which are retractable on the EBR-10, are NOT rubber as far as I can determine looking at photos, but are in fact metal, with paddle like blades on them, no doubt used for helping the vehicle in slippery terrain. As such, they must be painted the same color as all the other metal parts of the vehicle. And, in my experience, modeling paint doesn’t adhere particularly well to rubber. Thus I feel that, at a minimum, these four inboard tires should have been made of injection plastic like the rest of the kit parts.

One other area that needs careful attention is in Step 6. Parts B2 through B5, and B9, cover the driver hull hatch details. There are two sets of these parts, one for the front of the hull, one for the rear of the hull. When these parts were assembled and test fitted to the opening in the front and rear of the main hull, they did not fit at all well on my kit. I ended up gluing some shims of Evergreen plastic sheet stock to the main hatch parts, and then sanding as best I could to get a better fit.

I painted my Panhard kit a green shade that I achieved with the following mixture of Tamiya acrylic paints: 4 parts XF-81 RAF Dark Green, 1 part XF-61 Olive Drab, and 1 part XF-2 White. This after reading a discussion of the 1950’s French military green on the Missing Lynx modeling web site. Hobby Boss’ painting instructions are a tad confusing in that they recommend using Tamiya XF-20, which is a grey color, while in the Humbrol and Model Master lines they recommend the equivalent of FS-34102, the US green used on Vietnam-era US military vehicles. I like my color, but if you aren’t a fan of mixing paints, I would definitely go with the FS-34102 green rather than a grey color, based on the many photos of the EBR-10 I have seen.

Once painted, I applied a coat of Tamiya X-22 Clear Gloss to the model, to help with decal application. The decals provided in the kit are few in number and are for one vehicle only, which isn’t listed for any particular unit or time period. Those decals that were applied to a flat surface, such as the front and rear license plates, went down fine. However, those that went onto uneven or curved surfaces, such as the yellow and black vehicle weight markings, did not want to conform well to the surface of the model and took a number of applications of decal solvent before they finally lay down nicely.

After the decals were allowed to dry for 48 hours, I then applied a couple of additional thin coats of Tamiya XF-22 Gloss Clear to seal in the details. Then various oil paint pin washes were applied to the model to try and highlight the details. Once these were dry, a coat of matt clear was applied to seal everything, followed by various additional weathering applications via oil paints, and airbrushed dust.

What can you say? A state-of-the-art model of an EBR-10, who would have ever thought this possible?! Hobby Boss is to be commended for stepping outside the box, away from the overcrowded World War 2 subject area, and into an area little served by the modeling industry: 1950’s military vehicles used by the medium-sized armies of the world!

Following my construction clues above, I highly recommend this model to anyone looking for something different to put in his display case. I offer my sincere thanks to Squadron-MMD for supplying this kit for review, and to IPMS USA for allowing me to review it.