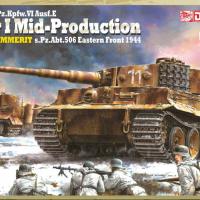 This is Dragon’s eighth and latest release of the Pz. Kpfw. VI Tiger 1. The kit contains many parts, great detail and a nice finished product. It is a re-box of Dragon’s 6700 Tiger 1 released in 2014.

A lot of the sprues have unused parts from the 6700 kit, as well as some other kits. The Zimmerit looks very realistic and there are many other goodies in the build.

The sturdy Dragon box is filled to the top with parts, and is quite heavy. Each sprue comes in a plastic bag grouped with similar parts. Looking closer at the parts, they are highly detailed with molded weld seems, and molded Zimmerit.

The kit includes 3 camo schemes to choose from using a three side diagram.

The instructions start off with assembling the drive wheels and the many sets of road wheels. Step one continues with inserting the 16 torsion bars into place, and inserting hubs on the ends of the torsion bars so that they can be functional.

I decided to glue the bars into place because they otherwise would cause the wheels to move during painting and application of the DS tracks. This also left out part H3. (The inside torsion bar hubs)

Instead of replacing the standard kit parts with parts that have a zimmerit coating, Dragon has simply added the second set of parts to the older, existing kit. Consequently, there are two versions of many of the parts that appear identical, save for the zimmerit coating. Make sure you have selected the correct parts before you apply glue! I accidentally used the rear plate without the zimmerit coating, and ended up having to make my own zimmerit using sculpting putty and a hobby knife. (See picture).

The back plate consists of many parts, so the instructions are very busy. Double check that you have added every part.

The jack is a model in itself. It contains six parts that make it look very realistic.

The lower hull finally concludes with step seven, adding the engine detail. Overall, the detail of the lower hull is superb. There are many parts that make up this section and all fit together great. It can get confusing at times because of the duplicate sprues, so be careful there. Thankfully, Dragon uses a color coded system (blue and black) on the parts map and instructions to distinguish between sprues that have the same letters.

The upper hull, step eight, kicks off with the assembly of the front main armor plate. There are seven pieces that make up the machine gun and slide neatly into the MG socket. This plate is then set aside for a few more steps.

Now it’s time for the upper deck. When I first flipped to step nine in the instruction booklet, I thought, “Wow that’s a lot of parts!” It is very time consuming but the more parts, the more detail.

The tow cables that loop around the engine grates are quite tricky to install. Once you have cleaned the seven connection points, glue half of the cable then the other half. Get them glued on their own before attaching the cable grab hooks (Part C16, J19).

Since the instructions are so busy, be sure to add the engine grate PE before you secure the chain on top of them. It is very easy to forget about this extra detail before it is too late.

Then the instructions jump back to a fairly tricky step with the frontal armor plate among step nine. Dragon includes a nice pre-bent electrical wire for the front convoy light. Two touches of super glue, a bit of fiddling and it should be attached nicely. Great detail.

Step 10, the main gun, consists of about 16 parts. Three for the muzzle brake, three for the barrel, four for the gun plate, and a number of others for interior detail. There is a little seam running along all of the gun pieces, but after some sanding it looks fine. There are no two half barrel pieces as a result of the slide molding.

Still be careful that the correct armor plates with Zimmerit are being used.

The detail in the gun is superb!

Step 13 depicts the upper hull deck and fenders being attached to the lower hull. The instructions call for the DS tracks to be attached in step 19, the last step. I installed them at this stage to avoid interference with the fenders.

I have to make one note about how the deck fit to the lower hull. It clicked in at the front, but sat about ¼ inch above in the back. A couple of C-clamps and it can be leveled a bit. A little putty fixed the remainder.

The gun assembly clicked right into the turret easily, but make sure you push the gun down as far as it can go.

After assembling the hatches and the multi-piece cupola, they were fastened to the top of the turret. The fit of the top turret to the bottom was not so great; very similar to how the top deck didn’t fit to the lower hull. After some squeezing and clamps, the piece finally sat down.

The last thing to build and mount (step 18), is the travel lock for rear traverse. There are quite a few parts to glue but it looks satisfying. After looking at many pictures of the Tiger 1 Mid, it shows many of them with the rear travel lock not attached. I left it out for this reason.

One of my favorite parts of any build, is the painting and weathering. The whole model depends on these steps to make or break its realism.

I first loaded up Tamiya XF-69 NATO Black. I sprayed the entire model with this. Not only does it act like a primer, it also is a good color for the tracks and rubber.

Over this I sprayed Tamiya XF-2 White in specific areas that I wanted to lighten the top coat. This step is better known as the “white and black pre-shading method.”

After the black and white had dried, I used Tamiya XF-60 Dark Yellow. I carefully sprayed this on the entire model aside from the tracks and rubber parts of the wheels. I made sure to leave some of the black pre-shading show through.

For the camouflage itself, I used Tamiya XF-64 Red Brown. To get started, I used the kit diagram for s.Pz.Abt. 506 Eastern Front. I eventually just used my imagination to finish off the camo.

I used a variety of paints for the pioneer tools, machine guns and the exhaust. For the exhaust stacks specifically, I used Vallejo Red Oxide pigment mixed with water and applied it. Then I put a rust wash using AK Rust Streaks.

The Cartograf decals were very nice. I applied them to the model and then gave the decals multiple coats of Micro Sol so that they would sink into the zimmerit, which they did.

The first weathering technique I do to a model is give it some light dry brushing. This helps the corners and small details pop out nicely. Then I gloss coat the model and add the decals. Once they are dry, another coat of gloss is applied to prepare the model for washes.

I used a series of washes using oil paints Burnt Umber, Raw Umber, Ivory Black, and Yellow Ochre. These washes gave the model some depth. A flat coat was applied to seal everything in place.

For the mud I used Vallejo Thick Mud and applied it lightly to the wheels, fenders, front, and back. Using some other pigment colors, some tone variation was achieved.

The tracks were already painted in NATO Black from Tamiya. Using Vallejo Model Wash European Earth as a pigment fixer, I packed Vallejo Natural Umber Pigment into the tracks. A final dry brushing of AK True Metal Steel was added.

The whole model was finally dusted with Tamiya Buff to give a dirty dusty look and to tie in all the washes detail painting, and decals.

Overall, this model was a joy to build. No major fit issues, great add-on parts, and much more. This model can be for builders anywhere from intermediate to expert. The part count can throw some people off, but in the end, it really looks great.

Dragon has put together a great kit that lots of people will enjoy. Make sure to follow the directions and HAVE FUN!

Thank you to Dragon Models for providing this kit for review, and to IPMS USA for giving me the opportunity to build it!

Hull with turret before final paint

Close-up of detail up front

Looking down the barrel of the painted fully assembled kit