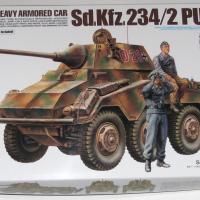 Among the variety of wheeled armored vehicles which saw action in WWII, the Sd.Kfz.234/2 – armed with a 5cm gun – boasted the strongest firepower. The Sd.Kfz. 234 series, which was developed as successor the 8 wheeled Sd.Kfz. 231, had an important role in reconnaissance missions for Blitzkreig tactics. Four variations from 234/1-4 were deployed with differing armament and the 234/2 was the first in this series. Unlike the 231, armored with plate bolted onto the frame, the 234 adopted a monocoque structure to improve productivity and strength. Controls were located in both ends and the front armor plate was 30mm thick. The Tatra-made Type 103 air-cooled V12 diesel yielded 210hp, a maximum speed of 80kn/h, and a range of 1000km. The chassis had sophisticated 8-wheel drive and 8 wheel steering mechanism. The turret was armed with the 5cm Kwk39/1 gun which was able to penetrate 37mm thick armor plate from a distance of 1500m with armor piercing ammunition. The maximum load was 55 rounds. An MG42 machine gun was also mounted. A Fu.Spr.f radio for car-to-car communication was equipped to the turret rear while command cars were also equipped with the MW radio Fu.12 and star- shaped antenna. The production of the 234/2 started in Dec. 1943 and lasted until Sept. 1944. During this period, a total of 101 were produced. These vehicles were deployed to units in Normandy, Ardennes and the Eastern Front. With superior firepower, mobility, and a wide range of operations, the 234/2 took an active part in roles such as forced reconnaissance.

Upon opening the box you will be presented with 5 sprue of tan injected molded plastic, 1 fret of photo etch, 10 page instruction fold out and a small bag with decals and a 4 piece sprue of updated view ports. This kit was initially released by Italeri in 1982 and does show its age but still is a good looking kit.

It begins with the lower hull, specifically the suspension and wheels. The first 5 steps are devoted to this. The construction is fairly simple but you really have to follow the instructions especially on steps 1 & 2 (The suspension arms, parts A6 and A7). You really have to put A5 on to parts A6 or A7 BEFORE attaching to the lower hull. I thought I knew better and……..well, just follow the instructions or you’re going to have problems. Everything else went on rather easily and the fit is good. Next up is the interior of the lower hull (steps 6 & 7) and this is quick as only 20 pieces make up the interior. There is ample room to add some scratch detail if you wish. Everything here fit well and I had no real problems….other than the ones I created!

Steps 8-14 deal with the upper hull and most of the small tools and accessories that go on it. I wanted to pose the driver view port open but unless you do some scratch building, (and I didn’t) it’s staying closed. The new Jerry cans and brackets look very nice but be forewarned, the photo etch straps are thick and should be annealed to make them bend easily. Another nice feature is that you have a choice of two different ways of posing the brackets. One with the straps holding a jerry can and a two piece assembly to pose an empty bracket with the straps lying inside…or outside if you choose.

Steps 15-18 deal with the turret which is a pretty simple but decent looking. Tamiya has reworked the mantlet from the original kit and it does look better. The interior consists of two seats, T & E dials and the gun. The gun is basic but what little you can see through the two small turret hatches looks pretty good. There were no fit problems with this and it pretty much fell together. The final step (#19) is for the antenna, mirrors and two small posts on the ear of the vehicle. This is where I had a problem and it was MY fault. The two rear posts (part A62) fit on the outer corner of the fenders, but on both sides I had placed the Jerry cans and tools too far back, and did not realize this until it was too late! So my vehicle ‘lost’ these in battle….that’s my story and I’m sticking to it.

I mostly used Tamiya acrylics on this except the tires, tools and Jerry cans which were painted with Testors paints. The decals are nicely printed and went on without problems. You are given marking options for two vehicles #1) 1st Armored Reconnaissance Battalion, 1st Panzer Division, France, summer 1944. #2) 2nd Armored Reconnaissance Battalion, 2nd Panzer Division, Normandy, June 1944.

When I told some friends I had taken this kit to do a review they laughed and said “it’s a dog”. It’s not the newest kit out there and may not be the most accurate but it’s not a dog. Overall it went together quite well and looks like a 234/2 and I had fun building it. I recommend this kit to anyone but beginners…buy it, have some fun and build it!

I would like to thank Tamiya USA for supplying this kit, the review corps for letting me build it and all of you for reading this.

Puma Right Side
Previous Next