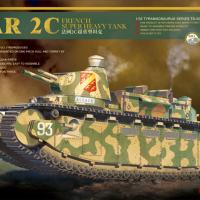 Following on from their superb yet diminutive FT-17 WW1 French tank, Meng Models of China provides the modeling public with a colossus of a tank model, the French Char 2C. Like the FT-17, the Char 2C was born during the years of battle in World War One, but came too late in the piece to see combat. Before the prototype was even completed, an order was placed for 300 of these gargantuan beasts, but due to the war coming to an end, this order was subsequently cancelled, and only 10 Char 2C’s were eventually delivered in 1921, becoming the largest tank ever to enter service in any of the world’s armies. The 10 vehicles went on to become mainly propaganda vehicles, “staring” in various cinematic productions to show the strength of the French military machine. Each of the ten tanks was named after the ancient regions of France: Poitou, Provence, Picardie, Alsace, Bretagne, Touraine, Anjou, Normandie, Berry and Champagne. Normandie was renamed Lorraine in 1939. And while to the French public these tanks gained a reputation as super tanks, land battleships in fact, the French military knew different, and they were never put into battle. Rather than letting them fall into the hands of the invading Germans in 1940, the French Army detonated charges within them, though one, Champagne, was captured intact, and sent to Berlin for display as a war trophy.

What’s In The Box

Despite the huge size of this model, with two exceptions it is a very simple one, yet one that does not scrimp on the detail. The parts are superbly molded, with fine rivet detail, no ejection pin marks or sink marks, and no flash. There is a very limited number of photo etch parts, and these should provide no issues even for someone who hates photo etched parts. The engineering of the kit parts is excellent, and everything fits together beautifully.

Section 2 continues with the suspension, before Section 3 and 4 move on to upper hull construction, before Section 5 and 6 revert back to suspension parts. The Char 2C has a track system similar to the British Rhomboid tanks of WW1. In Section 6, the modeler must make a decision on which vehicle from the color and markings options they wish to build. One has a lower “skirt” that hides much of the road wheel assembly on each side of the vehicle, Option C, while the other two options omit the skirts. The problem, if it is one, is that Meng has simplified the road wheel area, similar to the way Tamiya did on their French Char 1bis kit. If you go with Option C, which I did, then this simplification is hidden, and so gives one a “more accurate” model.

There are lots of very large sub assemblies as one works through this kit, but to the great credit of Meng’s tool makers and designers, nothing at all presented me with any difficulties, provided I carefully studied all the instruction drawings, and took my time. The only molding issue I came across was in the second to last Section, Section 18, the assembly of the smaller of the two turrets. There are 3 or 4 seam lines on the main turret piece, at the rear hatch area, that need carefully removing via sandpaper. Nothing major at all though.

The last section, Section 19, involves the assembly of the black plastic individual track links. These are very well detailed, and without ejection pin marks. Each one “snaps” or “clicks” into the next fairly well without the aid of glue. Once you have assembled the 67 links for one side of the tank I believe it behooves the modeler to prime (Mr Surfacer 1200) the tracks, and then paint them (Tamiya XF-84 Dark Iron) separately from the rest of the model. Later, when the main hull unit is primed, painted and decalled, you wrap the tracks around the outer hull suspension area, and then very carefully snap the length together. I did the final “snap” on the top of the hull, and it was a very tight fit, but fit it nonetheless did! I then got out my super thin Tamiya cement (green top), and VERY carefully (to avoid spilling it onto the painted surfaces of the model) applied liberal amounts to all the link joints, to reinforce the connection. It would be a real tragedy if following completion the tracks snapped apart!

As mentioned earlier, I chose Option C in the color and marking section, vehicle 97 “Normandie”. This is an overall khaki color, for which I utilized Tamiya XF-49. For fading the panels, I mixed XF-49 with some XF-60 Desert Yellow. The decals are printed by Cartograf of Italy, and as one has come to expect from them, were excellent. Well printed, being perfectly in register, with good color saturation. However, there was an error contained within them. Decal #11, which appears on the front of the hull as the word “Normandie” and a French tricolor has the flag back to front. From left to right it is red, white, blue. It should in fact be blue, white, red. So simply but carefully separate the flag portion from the name, and turn it around! This flag error also exists on Option B, Poitou. You have been warned.

Following the application of the decals, the whole model received a sealing coat of Gunze’s Mr. Color Flat Clear. Then a series of pin washes was applied using a suitably dark brown oil paint to highlight the armies of rivets which festoon this vehicle. Some rust colored oil paint was also mixed up into a wash, and applied over the tracks to make them a little more visually interesting. Finally, the contact points on the track were given a rub with a graphite stick.

Meng’s Char 2C is a simply wonderful model, with parts that fit exceedingly well. Despite its huge size, it only has two areas which have lots of parts: the road wheels, and the tracks. The rest of the model consists of a few very large parts, and a few detail parts that assemble flawlessly. It was a blast to build, a synch to paint, and makes one very impressive model when done. I have photographed it next to the FT-17, from the same era. All I can say is WELL DONE MENG! My thanks to Meng Models for providing IPMS USA with the review sample, and to IPMS for allowing me the pleasure of building this delightful model!