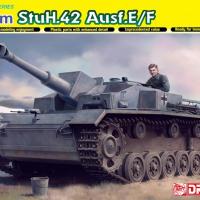 The StuH.42 (Sturmhaubitze 42, Sd.Kfz 142/2), was used to support armor and infantry. They were fitted with a 10.5cmStuH.42 L/28 howitzer offering greater destructive firepower than the StuG III that had a 7.5cm StuK 40 L/43 cannon. The 10.5cm StuH was modified to be electrically fired and fitted with a muzzle brake. The StuH 42 used the chassis from the StuG.III Ausf.E/F. Alkett, a major manufacturer of armored vehicles for the German war machine, produced 1,299 StuH 42 from 1943 to 1945. Additionally, the vehicle weighed over 26 tons.

Dragon’s version of the StuH 42 was first announced on March 15, 2016 and arrived on the shelves June 23, 2016. Dragon’s product website states that “The latest offering from Dragon represents a stunning 1/35 scale kit of an StuH.42 self-propelled howitzer based on a StuG.III Ausf.F chassis. This kit is cleverly based on Dragon’s highly sought-after StuG.III kits, but it incorporates completely new elements such as a retooled superstructure roof and fighting compartment. The front fenders are also brand new, and they are made from photo-etched metal to give maximum realism. Dragon’s StuG.III family in 1/35 scale was already impressive enough, but the line-up has just gained even more firepower with this fine rendering of a StuH.42 Ausf.F with larger-caliber gun!”.

This kit by Dragon is designated as being a “Smart Kit” which according to Dragon is easier to build straight out of the box. Also by using extensive slide molding techniques finely detailed parts are able to be reproduced without the need for photo etch. In my past experience with “Smart Kits” this has been true, so we will see during the construction process.

There are a plethora of sprues numbering eighteen with most coming from past kits such as Pz.Kpfw.III Ausf.f and the Heuschrecke IVb. Most are from the StuG.III Ausf past kits. Dragon is known for getting the most out of their kits. This kit is no exception.

Upon opening any model kit, what I like to look for is the amount of work, such as mold relief tapers, flashing, ejector pin release points (recessed or elevated marks), mold shift points, sprue attachment points and mold seams that need to be addressed during construction. The parts have crisp detail with little to no flash. A few pin release points were seen which will have to be sanded or filled. A note of caution: There are four sprues designated Sprue A’s. So, during the building process look carefully to see which sprue to use.

The instruction manual is printed in black, white and blue measuring approximately 7-1/2” x 13-1/2” in a portrait fanfold orientation. It contains eighteen steps on eight pages of clear uncluttered diagrams. The images for the steps also contain the paint color references for Gunze and Model Master paints. There is plenty of room for notations prior to or during the building stage on the sheet. As I use Vallejo acrylics I will have to do a little paint conversions prior to the painting process. Dragon provides in the instruction manual three different versions of the StuH with three different paint patterns and decals. Decals are printed by Cartograf of Italy, which in my past experience have laid down quite nicely using Solvaset or Microsol. The three different build versions are:

Even though there are quite a few aftermarket items which could be purchased and used, this kit straight out of the box looks to be a fine representation. With that said, I look forward to the building this StuH. Additionally, as modelers we do not always follow the instructions step by step, however in this review I will describe any irregularities or problems I encountered in the build step by step. Now for the fun process.

After completing each kit, I ask myself, “would I build this kit again?” In regards to this kit, my answer is “most certainly yes”. This definitely was an enjoyable build. The kit does have some issues, but I believe it is a good representation of a StuH. The kit has workable torsion bar suspension, but with the included DS tracks this cannot be accomplished unless individual track links are used and the suspension is reworked. There are several aftermarket manufacturers that supply metal and individual track links which could be added to use the workable torsion bar suspension. In reviewing several references during the build, I could not see a lot of sag in the tracks. But, if you want to display some sag with the DS tracks, I would suggest the “old school” method of pinning the tracks to achieve this desired sag. As with any Dragon kit reviewing the instructions is a must before the build begins. Above all, this kit is a great addition to any German aficionado’s model collection. I highly recommend this kit.

Thanks to IPMS/USA and Dragon Models USA for allowing me to review this kit.

Close-up of the hull detail

Right side view of completed vehicle

Completed model on wooden base
Previous Next