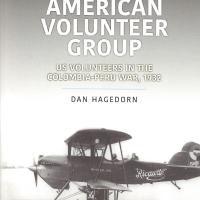 Everyone has heard of the AVG also know as the Flying Tigers and their exploits in WWII, but did you know that there was another AVG that served in Colombia in 1932? This book is their story.

In the early 1930s there was a border skirmish between Colombia and Peru when the latter invaded a very remote section of Columbia. So remote in fact that it was only accessible by floatplane or boats and thus there was a delay in the Colombian government finding out the Peru had invaded. Due to the remoteness of this area airpower was going to be the primary force to contest Peru.

Colombia’s air force was largely under the control of the German Airline that operated in the nation as little had been done by Germany to train locals in and on the aircraft. Also, the aircraft in use were largely of German manufacture which helped Germany maintain this control.

Enter Curtiss-Wright Export Corporation. In addition to selling quite a few aircraft to Columbia they helped set up pilot training and this relationship led to local air force personnel to begin flying some missions, but the reality was that there were more planes that pilots. This coupled with the Depression in the US and loss of many air mail contracts prompted pilots and mechanics in the USA to look wherever jobs were to be had. Colombia was offering $500 a moth to pilots around $250 a month to mechanics with a bonus for each Peruvian aircraft downed as well as covering of expenses. Truly huge amounts of pay given the economic situation in the USA at the time.

The author has done an excellent job to cover this even though the book is less than 100 pages. The book is divided into nine chapters. They are Introduction, The Avaicion Militar at the Dawn of the 1930s, The Curtis-Wright Connection, Colombia Attacks, Curtiss-Wright arrives in Force, El Mision de Aviacion Norteamericana, Flying in Colombia, A few words About the Opposition and Opening Moves and the Combat Period. The book is profusely illustrated with photos of the many various aircraft in use and life while serving in Colombia. Many of these have probably never been seen outside of Colombia.

I recommend this book to anyone with an interest in aviation, aerial combat in South America, between the war years as well as the modeler; all will find something of interest in these pages. For the modeler there are many interesting between the wars aircraft with various unusual schemes that will catch eyes both on your collection and on the contest table. My thanks to Casemate for the review sample and to IPMS for the opportunity!