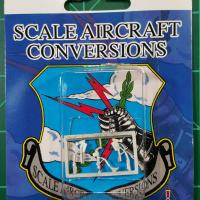 Scale Aircraft Conversions is known for making replacement landing gear for a wide variety of kits in virtually every scale in which model aircraft are available. This set is designed to replace the plastic gear in the Airfix Folland Gnat T.1/F.1 kit.

The set includes both main gear legs with their integral retraction struts and the nose gear. The struts are very sturdy and are made to be drop-in replacements for the kit parts. The parts require very little clean up, though some parts do occasionally become a bit bent during shipping. No worries there, though, since they are very easily straightened. Recommended, especially if you’re adding a bit of weight to make sure your Gnat isn’t a tail sitter. You’ll probably need it, too, considering the normal tail-low stance of the diminutive fighter.