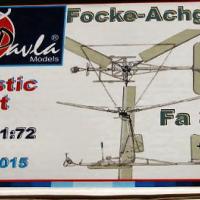 After being let go from Focke-Wulf in 1936, Heinrich Focke went on to form the Focke-Achgelis company with Gerd Achgelis. The goal was to focus on the development of helicopters for Germany. The Fa-330 Bachstelze, or “wagtail” in English, was actually a rotary-wing kite that was typically towed behind Type IX U-boats via a 500 foot tow line. The aircraft could be deployed by only two crewmembers, and could be launched and attain full altitude in about seven minutes, providing about twenty-five miles of visibility while searching for targets for the U-boat. The U-boat moving forward at around 18 knots was sufficient to keep the aircraft flying. Unfortunately, the process for reeling the aircraft back in took considerably longer, so if under attack, the best option was to cut loose the aircraft (although this was probably not looked at as the best option for the pilot).

Although some two hundred Fa-330’s were built; the expendability of the crew and aircraft seemed to make them unpopular among U-boat captains, and few were actually deployed. The single successful mission attributed to the use of the aircraft was the sinking of a Greek steamer in August of 1943 by U-177. There are several examples that survived the war, and are now on display in museums in the United States, England, and Germany. (Editor's note: i've taken the liberty of attaching two photos I shot of an Fa-330 on display at RAF Cosford...John N.)

Although released several years ago (I built one in 1999), the folks at Pavla Models contacted the IPMS/USA Reviewers' Corps, offering their kits for review. This particular release consists of nine plastic parts, nineteen photo-etched parts, and a decal sheet with six German crosses. The plastic parts are few and simple, but they do look a little on the heavy side for the rotor blades and rotor hub, but the overall detail is adequate for this scale. The brass photo-etch fret is well made with an excellent level of detail, and being brass, the parts are easy to form to shape.

Assembly was straightforward enough for a kit with this number of parts, but I would not recommend building this for your first, mostly photo-etched aircraft. Once fully assembled, the small aircraft is very delicate, so please understand that going into the build. The single-page directions are easy enough to follow, and a single recommendation for the color scheme is provided. I did some research on-line to choose my paint scheme, as the mostly RLM 02 scheme was too monochromatic for my taste, so I utilized RLM 02 for the tubing and RLM 21 for the rotors, tail, and rudder (the seat is linen).

Unlike the Molch midget submarine that I recently reviewed, everything needed to represent your Fa-330 is in included in the box. I did consider replacing the wing braces (photo-etch part M 18 in the kit) with a piece of wire to provide the round shape of the real thing, but then opted to keep this easier on myself. I did veer away from the kit directions by attaching the rotor hub to the airframe with a short piece of wire in order to allow the rotor to spin.

As I mentioned previously, construction was not too challenging, but it is a good idea to take your time and check your references and be cautious when bending photo-etch parts M1, M3, and M13. To add a little something different to my kit, I angled the rudder slightly to break up the lines a bit. If you take your time, this kit builds up to an excellent representation of a real Bachstelze.

For my hits of this kit, this is another unusual subject chosen by Pavla, and 1/72 scale seems reasonable to represent it, even though I do not think that I have seen a 1/72 scale Type IX U-boat. As there are so few known deployments of the aircraft, I think a little artistic freedom would probably allow displaying it with the Revell Germany Type VII U-boat of this scale. As I mentioned, the detail is very good with this kit, especially with the photo-etched parts.

I really do not have any misses for this particular kit, as long as the builder has a good understanding of what they are getting into with a mostly photo-etched aircraft. With the first one of these that I built, I almost felt as though merely looking at the aircraft the wrong way caused parts to bend or break off. Even when properly assembled, the brass will not take any form of abuse without causing immediate issues for the modeler.

Overall, I would highly recommend this kit to folks wanting to add a unique World War 2 aircraft to their collection. As I mentioned previously, I would strongly recommend that the builder have some experience with photo-etched parts before taking on this project to save frustration.

I would like to thank the folks at Pavla for providing this review kit to the IPMS-USA, to the review corps for allowing me to perform this evaluation, and to you for taking the time to read it.