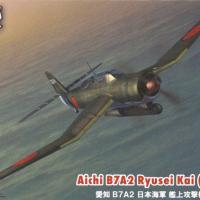 The Aichi B7A torpedo bomber was an attempt by the Japanese Navy to provide a state-of-the-art general purpose carrier-based bomber to replace the Nakajima B6N “Jill” torpedo bomber and the Yokosuka D4Y “Judy” dive bomber with a single type capable of both roles. It was planned to operate these aircraft from the IJN’s largest carriers, the Taiho and the Shinano. Powered by the new Nakajima Homare 1800 hp. radial engine, the first prototype was built and flown in 1942, but development problems, mainly concerning the engine, slowed the aircraft’s path to service introduction. By the time production started in 1945, an earthquake had destroyed the plant, and only a few were actually allocated to units. Since the fleet carriers that the Japanese Navy planned to operate from had all been sunk by the end of 1944, (the Shinano, which was launched at the end of 1944, was sunk by an American submarine only ten days after commissioning, a kind of record for brevity of service), the few that were completed were assigned to the land-based Yokosuka and 752nd Kokutais, where they saw only limited service. A total of only 114 examples were completed, including prototypes, and fortunately, of the two aircraft brought to the US after the war, one is still in storage at the National Air and Space Museum’s facility at Silver Hill, MD.

There isn’t a lot of reference material available on this aircraft. A good account of its service life can be found in Francillon’s Japanese Aircraft of the Pacific War, and this includes photos of the prototype and one production model. An excellent three-view is provided, along with development and production model details. Phil Butler’s excellent work War Prizes has data on several captured examples. Some in-box reviews of the kit are available on line, but I haven’t seen a full-build review.

The kit instructions consist of twelve pages of half-letter sized paper, including a history, sprue diagram, cursory color guide, 7 pages of exploded assembly drawings, color guides for the three examples for which decals are provides, and a couple of pages showing other kits that Sword has available. The color information is weak, especially in the camouflage colors. I would question the shade of green shown on the box art, especially in the three profile views. The box art shows profile drawings of the three examples, giving documentation for the units operating the types. The instructions provide 4-view drawings of each aircraft, showing paint separation lines and decal placement. However, there is no information of the colors of the bombs or torpedoes provided in the kit. There is enough other information to work with, however.

Decals are provided for three aircraft, two from the 5th Squadron, 752nd Naval Air Group, operating from Japan in 1945. The decals are of excellent quality.

The kit consists of 70 grey styrene parts, 6 clear parts, and 3 resin parts. Casting is crisp, with recessed panel lines. There is some flash, and some trimming is required. I have always wondered why kit manufacturers mold small rod-like structures, such as landing gear struts and pitot tubes, with the sprue join line in the middle, rather than at the end. These are delicate parts, and are easy to lose or destroy during the trimming process. The fuselage has a lot of good interior detail, including seats, a bomb sight, radio, instrument panel, control stick, rudder pedals, and sidewall detail, and painting instructions provide colors for each component. The wheel wells fit nicely into the wings, showing full detail.

The fuselage interior detail needs to be painted and installed in place. The kit instructions aren’t too helpful on the floor assembly, as some parts are drawn inaccurately. Once this assembly is completed, it needs to be glued into the left fuselage side. Once dry, it has to be trimmed before it will fit properly, and the instrument panel is a dicey fit. The engine should be mounted in the nose. Position markers are provided, but fitting it is still tenuous. Once the fuselage is together, some filler is required on the seams. The wings then can be attached to the fuselage, but these don’t really fit at the correct dihedral angle (a front view drawing is on page 5) so a lot of filler is needed to solve this problem. Also, the fuselage is rather difficult to line up fore and aft, and the interior structure needs to be filed down so that the fuselage halves fit together, so make sure that both sides are in an even position. At this point, I attached the tailplanes. They, like the wings, have small tabs which help immensely. The machine gun and other cockpit interior parts can then be installed, along with the scratchbuilt gunsight glass. Then the canopy pieces (all 5 of them) can be installed on the fuselage. Now is the time to mask off the canopy. It didn’t take nearly as long as I expected, although you better not forget the small glass window in the bomb bay door. This part, incidentally, does not fit, and has to be replaced with a scratchbuilt unit. Neither does the radio mast line up with the hole in the canopy, so this has to be attached after painting. The prop is somewhat crude by comparison with other kits I’ve built, but eventually I got it lined up properly.

For the torpedo-armed version, the kit can be built without modification. If, however, you want to do the bomb-carrying version, you will have to trim off the doors on the lower fuselage carefully. This can take some doing, so make sure which version you want to do, as once the fuselage halves are joined, it will be too late to build the bomber. The interior detail of the bomb bay is, however, very nice.

At this point, I painted the airframe IJN light grey and IJN green, Model Master colors. When dry, I removed the masking tape and attached the landing gear. I painted the yellow wing leading edge markings first, and then did the basic colors. I didn’t do a lot of weathering, since these planes did not operate for very long, and the only photo I have seen of a production B7A2 shows it after capture in somewhat pristine condition. The decals were of very high quality, and went on with no problems. One problem I encountered was that there is no information given in the instructions, or in Francillon’s book for that matter, on the antenna arrangement. The radio mast is shown, but I couldn’t find where the wires went. Then I checked the instruction sheet on the Fujimi kit, and it had all the information I needed. Problem solved.

The only kit this one can be compared with is the old Fujimi kit from the middle eighties, and although it depicts the early B7A1, there really isn’t much difference between the two aircraft. The B7A2 had 25 more horsepower and a 13 mm machine gun in place of the earlier 7.92 mm gun, hardly things that would preclude one from backdating or updating either kit. Both kits have good external detail, while the Sword kit has much better interior detail, although it probably suffers from the usual Sword problem of too much detail. The Fujimi kit, retailing for about $20.00, is much cheaper. I have built both kits, and both are good ones, although the Sword kit should probably be reserved for more experienced modelers.

I’d like to thank Squadron for supplying the review kit and IPMS-USA for allowing me to review it.