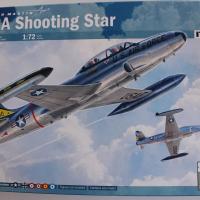 The Lockheed T-33A, a two seat variant of the original Lockheed P/F-80 “Shooting Star” is perhaps one of the best known non-combat aircraft used by the U.S. Air Forces, along with the Navy, Marine Corps, and many foreign air forces. First developed in 1947, the prototype was a converted F-80C fighter with a two seat cockpit and deleted armament. First designated TF-80C, production began in 1949, and the type remained in production until 1959. Navy versions were called TV-2, and later T-33B. Nearly 6,000 were produced, and the type was also used by many foreign air forces, and was also built under license in Canada and Japan. They have since been replaced by the Northrop T-38 series, but many civilian licensed T-33’s are flown by wealthy warbird enthusiasts, and they are occasionally to be seen at civilian fly-ins throughout the country. In addition, many T-33’s were assigned to Air National Guard units in the U.S. The ultimate development of this aircraft was the two seat F-94 Starfire, which was used by the USAF during the fifties.

The T-33 is covered in numerous references, including Swanborough and Bowers’ United States Military Aircraft since 1908, and Squadron-Signal’s No. 40, P-80 Shooting Star (T-33/F-94) in Action, and I am sure that many sources for this aircraft can be found on line.

The instructions consist of a stapled booklet of 12 pages, which includes a short historical sketch, a sprue diagram, a color guide, three pages of assembly drawings, and five sets of four view drawings of the aircraft depicted in the very colorful decal sheet. The decal sheet includes markings for two USAF T-33A’s of the 5th FIS at Minot AFB, SD (differing only in a slightly different fin flash), and one each aircraft of the air forces of Germany, Italy, France, Spain, and Greece. When finished with this kit, you’ll have spare decals for a number of different models. Oddly, there are no decals for the instrument panels in the cockpit, which would have been helpful.

Although this is a new issue, the T-33 has been produced by Hasegawa, Heller, and Platz (My IPMS Review in 2012), so this kit has some competition, as all of these producers have good kits on the market.

The kit consists of 5 sprues of about 58 light grey styrene parts and one clear canopy. The canopy is molded in one piece, so if you want to leave the canopy open to display the cockpit, you’ll have to cut it just behind the windshield. The parts are very well molded, with recessed panel lines and very little flash. There are a LOT of small parts for this model, so be careful when you remove them from the sprue or the carpet monster will devour them.

The kit goes together very easily, although many parts should be painted first. The parts fit very well, and there are very few seams that need attention. The cockpit interior requires serious painting, as you are asked to paint small dots where the instruments go. A decal sheet would have made this much easier. Assembly of the wings and horizontal tail surfaces is easy, and they line up perfectly. Once painted, the landing gear can be attached. This is a rather complicated process. I used super glue on some of the landing gear doors. Of course, you need to load the nose down with some kind of weight or the model will sit tail down. This is alluded to in the instructions.

The aircraft I modeled was a USAF type, all aluminum, so painting was a snap. I attached the clear canopy, painted some black on the nose for an anti-glare, and then masked off all of the black. In addition, I painted the insides of the landing gear wells in green zinc chromate, and masked these off. Then a good coat of aluminum and the plane was ready for decals. The decals went on smoothly, although they are a little thin and care has to be taken or they will make their escape. When they are dry, they can be sprayed with clear Glosscote, and they’ll be on for the life of the model. There are a LOT of decals, including little “no step” signs and other signs telling maintenance crews not to do this or that. I took about an hour to get all the decals in place, but probably would have spent less time if I had done a foreign version, although the basic painting would probably have taken longer.

This is a nice little kit that should result in an attractive display model. Get one while you can. Highly recommended.

Thanks to Italeri, Phil Peterson, and Bill O’Malley for the review kit.

FYI - this is the Platz kit

Just an FYI for you, this is the Platz kit.

Yes, Cliff is correct.  This…

Yes, Cliff is correct.  This kit is the Platz tooling, which has (presumably) been acquired (borrowed?) by Italeri.