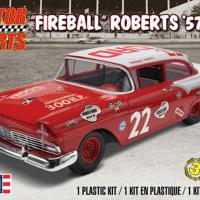 A rather large box arrived from the Review Corp helper the other day, containing several car kits and one airplane. The boxes all were the same to me. These are cars and to be honest, other than helping a nice lady sell off her late son’s collection, I know nothing about cars. I am however learning a large amount of information from them. This kit had a lot more weight to it than all the others and I wanted to know why. Was it the two metal axles, additional parts, super detail stuff that added to the weight? I had to know!

We all know the story of Monogram and Revell becoming one entity. I thought that most of the Monogram line was re-kitted using the 85- as an identifier. However, I also thought Monogram kits were all 1/24 and only Revell kits in 1/25. This is an 85- numbered kit but in 1/25 so maybe my assumptions were wrong. Either way, this is a really nice kit.

Well, I may not know the EXACT reason for weight increase but I may have a good idea. The tires are solid rubber/vinyl which adds to weight and there are a lot of sprues. There are a total of 15 sprues. That is a lot for a car kit….I guess!

After looking over the parts and checking the internet, there are appears to have been at least three different cars based on this basic kit. There was a Custom 2-n-1, a Police Cruiser and this release. The number of sprues was multiplied based on needed parts. Revell following in Dragon’s footsteps. Now that is a funny thought. Also included are real metal tail pipes and four metal pins for attaching the tires. The instruction sheet is 12 pages long in pamphlet style format. Again, there is an included list of each part’s name. I think this is a great idea and applaud Revell for doing it.

The decal sheet is absolutely gorgeous and allows for two different color and marking schemes. I think only one is for the machine Mr. Roberts drove. Another neat feature of the decals, the instrument panel, has holes for the dials and you apply the decal to the back of the panel. While the more advanced modeler may want to approach this differently, it is a nice touch. Also, the interior is replicated by decals! NICE touch (if they lay down well).

The parts are nicely detailed and I liked the tuck & roll applied to the inside of the roof. However, this also generates an issue. There are four large ejector pin marks in each corner which will definitely cause the builder some issues should he desire to remove them. All the white styrene parts look really nice and flash free.

The chrome tree is not that good. There is excessive flash on both the bumper parts and because of their location you are going to be doing a lot of re-chroming on this kit.

I would like to thank Revell for releasing and providing this kit for review. I love the “old” style of racing cars. The 50’s and 60’s track racers were always so cool to me. Thanks also to IPMS/USA for allowing me to review such a cool car. Get out there and pick up one of these kits and turn it into a nice oval track racer!

Ejector pins on inside of roof