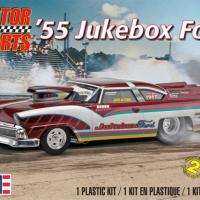 Pro-Modified cars are some of the most killer machines on the planet! I mean what is not to love about an old muscle car that has been stretched, chopped, and a throwing a HUGE powerful engine under the hood? They combine power, speed, coolness and creativity into some crowd pleasing machinery. Dick Brown Motorsports runs this beautifully modified 1955 Crown Victoria with a stretched Boss 429 engine. I have no idea the last time this monster raced. I know it was driven by Norm Wizner, who also appears to be a custom builder as well as a driver. He runs a customizing shop that has a 2005 copyright on it and all the links on the bottom page were bad. I was able to find two photographs of this real machine and only one of them had a date on it…..2011. Norm must love the Fords. In 1987 he built the Mega Ford to take on the Chevys on the circuit.

As this is a 1/25 kit, I believe it is a re-release from the Revell Vault. It appears only to have been released once before and I am unaware of the date. This is really one nice kit. All the parts are nicely packed in bags to protect the parts. There are three Chrome sprues alone! Very nicely done. These re-releases come with a really nicely done pamphlet style instruction sheet with the name of the parts called out before you start the assembly steps. I think this is a GREAT idea and miss the old Italeri kits that did this. I think it helps the younger modelers really enjoy the build that much more.

You also get a nice decal sheet, a clear parts sprue and four white sprues. Something that I found odd on this kit was that the white sprues almost looked like the old “glow in the dark” plastic. The sprues all had a “see through” quality about them. This may be a new plastic formula or maybe this was just something different compared to the Miami Vice Testarossa, Lil’ Coffin, Fireball Roberts, and Miss Deal. Regardless of this, the parts themselves are nicely done and do not appear to suffer from any age issues. There are four nice sized ejector pin marks on the inside of the roof that you might have to deal with. Other than that, the kit just looks gorgeous. There is more flash on one sprue of my new Trumpeter D30 122mm Howitzer than on this whole kit. Way to go Revell.

I would like to thank Revell for re-releasing this gorgeious Crown Vic and providing this kit for review. Thanks again to Dick and Dave for allowing me to review it and IPMS/USA for the space for others to read the review. Swing by your LHS, Hobby Lobby or Michaels and pick up one of these monsters to add to your stable.