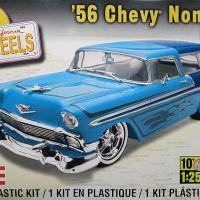 1955 was a milestone year for Chevrolet, with the introduction of an OHV V-8 and all-new styling, and a new wagon in the line – the Nomad 2-door hardtop. The follow-on 1956 Nomad had styling and trim more closely allied with the other cars in the Chevy line and had more pizzazz than the ’55, too.

Revell has re-issued the 1997 Monogram kit in its 2’n1 series, featuring additional customizing parts – wheels, chrome valve covers, alternator, low-profile tires, larger disc brakes, and chassis/suspension parts for the custom build, along with a nice decal sheet with lots of trim and flames.

I’m old school, so decided to build the kit pretty much showroom-stock. The instructions are really slanted toward the custom version, with sidebars listing optional “stock” parts, though no illustrations are given for those. There are two rear axle spacers that weren’t in the original kit, but I don’t know if they’re for the custom version or should be omitted for the stock build. I used them anyway.

The moldings are pretty nicely-done, though a couple of mold lines extend through the chrome trim around the windows and are hard to sand down. The little “Nomad” script for the tailgate is cast on, but unlike the “Bel Air” scripts for the rear fenders, there’s not a decal for that. Not having the dexterity to foil that script and have it turn out looking decent, I opted to replace it on the model with a photo-etched one from a Model Car Garage detailing set for the ’56 Nomad.

I wanted to paint my model with one of the classic two-tone combinations of that era and settled on Sierra Gold and Adobe Beige. I used Tamiya X-34 Metallic Brown acrylic for the Sierra Gold as it was pretty close to what I wanted – the Adobe Beige is a mix of one part Tamiya X-6 Orange to eighty parts Tamiya X-2 White. I can’t speculate on the proportions for other paint lines. Sorry.

The kit’s a pretty straightforward build, so modifications I made to it were few; the first was to heat the exhaust pipes over a candle flame and bend them so they exited at the corners of the rear bumper instead of straight out the back, which the kit provides. Wagons of that era generally had that feature to keep exhaust fumes from entering the car when driving with the tailgate window open. The other modification was to substitute a radio antenna from hypo tubing and wire to replace the overly-thick one in the kit; I used the antenna base from the kit and drilled a hole in it to accept the tubing, which is a little more in scale.

Once the main components of the Nomad were basically all painted, the chrome trim on the body had to be foiled, which took me longer than usual. It took me lots of attempts and bits of wasted foil to get to this “dress-up” part of the build completed.

The decals for the stock version are limited to the dashboard, Bel Air scripts for the rear quarter panels, the Chevrolet crest on the hood, and a couple of underhood bits – and as with all the new Revell releases, they’re pretty much flawless and look great when put in place.

Highly recommended to the auto builder who likes the classic and iconic cars of the “Fabulous Fifties”. Thanks to both Revell and IPMS/USA for the opportunity to review this kit of a unique car in American history.