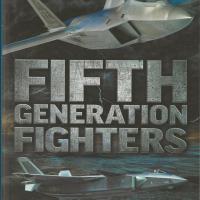 This is a revised and updated edition of the book originally published in 2018. The book covers the most modern of fighter aircraft currently in use and development. It is divided into nineteen chapters.

The first six chapters of the book cover the development of Jet fighters after WWII along with advances in armament, the use of missiles attempting to replace dogfighting as well as avionics and radar improvements and the development of stealth technologies.

The next nine chapters are aircraft specific, each covering one of the types flying at time of publication. First up is the first of the fifth-generation fighters, the F-22 covering its successes and problems, including the issues with the environmental systems that led to pilots having issues after landing with memory loss and alertness. Next is the F-35 which is hoped to eventually replace the F-16 and A-10 as well as be more mass produced than the F-22.

The next five chapters cover developments by the Soviet Union/Russia. Beginning with the Mig-35 and progressing through the Mig 1.44, Forward swept wing Sukhoi Su-47, Sukhoi t-50/Su-57 Russia’s ultimate fifth generation fighter and the Sukhoi LTS which is the Russian made for export sales version of the F-35. The last of the aircraft specific chapters conclude with two of the latest from communist China, The Shenyang J-20 a large stealthy blended wing/body fighter and the Shenyang FC-31 which bears both a physical and mission resemblance to the F-35.

The next three chapters offer coverage of various ne designs from other countries such as India, Japan, South Korea, and Turkey. Each trying to develop their own fifth generation fighter, The Hindustan advanced Medium Combat Aircraft, Mitsubishi X-2 leading up to the Japanese F-2 ATD-X, South Korea’s KF-X and Turkey’s TFX (single and twin-engine versions) each get a brief look. Concluding chapters discuss upgrades to existing aircraft to bring them up to near fifth generation configuration. The issues of SAMs, AWACS and satellite tracking all being used in aerial combat. The last chapter covers what is being developed to replace the fifth-generation fighters. These envision a combination of UCAVs and piloted aircraft with heavy reliance of stealth, blended wing/body design and tailless. Most of these are just in the design stage so their final forms are yet to be decided. But when these are produces, we may see engaging at hypersonic speeds, tracking over one hundred enemy aircraft at a time, and launching and taking out the enemy far beyond visual range. Even the possibility of aircraft coming down from the very edge of space faster than missiles.

I recommend this book to anyone with an interest in modern aviation, aircraft and aircraft systems design as well as the modeler; all will find something of interest in these pages. This book presents a good opportunity to learn about the latest in aircraft technology as well as what is on the horizon. My thanks to Casemate for the review sample and to IPMS for the opportunity!