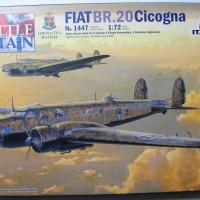 The BR 20 "Cicogna" low wing medium bomber was developed by the Italian aircraft manufacturer Fiat during the 1930’s. It entered service in 1936 and was characterized by its metal frame and retractable landing gear. Modern and fast for the period, it was deployed by the “Aviazione Legionaria” and had its baptism of fire in 1937 during the Spanish Civil War. In September 1940, the “Corpo Aereo Italiano”, consisting of the 13th and 43rd “Stormo da Bombardamento” were similarly equipped with the BR-20. The “Stormi” were stationed in Belgium and supported the Luftwaffe during the Battle of Britain. Despite operational comparisons with modern R.A.F. fighters that exposed the BR-20’s limits, it was used for the duration of WW2 on various fronts by several Regia Aeronautica bomber squadrons.

Opening the box you will find a bag with 3 sprue of grey plastic and 1 clear parts sprue, a decal sheet and a 10-page instruction foldout. The plastic is fairly free of flash and has just a few sink marks. The detail is raised, and it’s covered in rivets so be aware of that. The clear parts are a mix of really clear or foggy. The gun turrets are a little foggy but the cockpit, nose pieces and windows are clear. The decal sheet is nice, and everything was in register. Hard to believe this kit was first released in 1972 but it was and for its age, still looks pretty good.

The first two steps involve the construction of the interior and fuselage. There is just a very basic interior in this kit including 3 figures & seats, 2 bulkheads, floor, flight controls and control panel. You also must assemble the top turret and belly gun and place them when assembling the fuselage halves. Everything fit well so far but care must be used when gluing the fuselage halves or you may lose some detail.

Step 3 is for the engines and wings and the only problem I had was the engines didn’t fit in the nacelles correctly and I had to sand them down a little for them to fit.

Step 4 is where you attach the wings, canopy & nose to the fuselage. The wings fit well and there were no problems there. The clear nose pieces fit together well but there is a small issue when placing it on the fuselage. Test fitting and sanding got me a decent fit, but it still is off a bit. You also are called to place small exterior bits here, but I elected to wait until the end of the build to place these.

Step 5 is for the rudders and horizontal stabilizers, everything fit well, and I had no problems with these.

Step 6 is the final step and is where you place the landing gear and exhausts and also where I added the small exterior pieces. Pretty simple construction here and I found no fit problems here.

I used Tamiya paints to finish this, and the decals went on very easy and settled down with a little Micro-sol. You are given 5 marking options in this boxing.

This may be an older kit, but it still builds up well and is a pretty simple build. Also, it is still the only 1/72 Br.20 around. I recommend this kit to all modelers except beginners.

I would like to thank Italeri & MRC for this kit, the review corps for letting me build it and all of you for reading this.