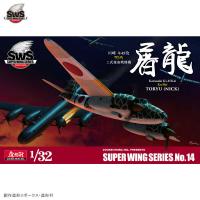 Part 3 of the 1/32 Nick build is the wings, painting, and final assembly

Construction of the wings began at the very beginning when the full span spar was added but now we’ll flesh them out. The first steps are adding the landing gear well walls and then the fuel tanks and aileron linkage rods. Then attach the lower wing panels. Make sure you drill out the holes in the bottom of each wing before doing so.

Next comes the somewhat complex landing gear parts. I used the kit parts here instead of aftermarket. Make sure you take your time with these assemblies and make sure each part is firmly glued in before moving on. Also, I recommend you paint them first before attaching since some of the parts would be hard to reach after being assembled. Most everything in the gear bays gets painted Khaki Grey. I chose the Vallejo paint line for this build and had purchased it along with the PE set directly from ZM. Once you are satisfied the landing gear is ready go ahead and attach the engine firewalls. The upper wing and wing root fillets are next I highly recommend double and triple checking that they all fit correctly before gluing. The directions also recommend this as well. And as a bonus no need to putty the wing roots! The lower wing fillets are next and like with the uppers check and double check. Set the plane aside and let the wings solidify. While all that was drying, I built the horizontal and vertical stabilizers and rudder. These went together with no real trouble. I do recommend leaving off parts c-6 of the rudder until after paint and decaling though as it will facilitate an easier time for each. The next step would be to add the main wheels and brake lines, but I chose to skip that until the end as well.

The nacelles are next. Double check the fit of each but both sides should snap in with very little issue. This is also where the engines from part one of the build are attached. If you remember each one was keyed to a side of the airplane. Make sure you attach each to the proper side. The mounting points on the engine mounts attach inside the firewalls. I had no issues with fit on mine but double check before attaching with glue to make sure everything is squared up and that the engines are oriented correctly. The directions give many diagrams to help you with this. Next up are the cowlings and cowl flaps. Steps 3-4 V-Y are some of the trickier parts of the build, but slow and steady will win the race there. First comes the forward cowl and wing cowling parts. Those went on with no issue. Then comes the cowl flaps, I chose to have these open and these went on with little fuss. Now here is where it gets tricky. The upper forward cowlings sit ok (the upper cowling will have a gap at its rear edge. This is correct! Do not fill that in or think something is wrong.) but the next six parts do not have a gap. You attach all 3 side and lower forward cowl panels; they are all slightly different and attach in a specific spot. I tried to attach them all at once on one engine and found they wanted to shift constantly causing gaps, so I started with part G5, attached it and let it dry and went around counterclockwise to make sure I could minimize all gaps. Its time consuming but works.

The last part of the build is to add the nose cone. Option A has two machine cannons that need to be attached before this. These look great right out of the box, ZM sells metal barrels but I chose to skip them. The nose light was also attached. (option A has it in the nose, option B has it in the wing) if you choose option A there is a cover that gets attached to the wing where the wing light would be. You also have a choice of nose. Make sure you pick the proper one for your option. The nose went on with little fuss and very little putty needed. I also kept the gun covers off so you could see the inner workings of the machine cannons. Once all this was done it was time to work on the canopies. All glass parts were dipped in future first then masked using the kit supplied masks. I chose to go with open canopies for the front and rear. I also kept the center section top glass out as well (I kept the center top removable to see the fuel tank detail. Main landing gear door arms were added next and the flaps were put in the raised position. They can be positioned either up or down but down has a fair amount of sink marks that need to be filled. I added the ailerons to the build, and it was time for paint and decaling.

In preparation for painting I first masked off all openings and areas I didn’t want to get paint on them. Then the aircraft was sprayed over all with Tamiya grey primer. Then the white wing and fuselage stripes were painted with Tamiya xf-2 flat white. Once dry these were masked and an overall coat of Vallejo “cement gray” was added. Once dry some of the masking was removed and the canopies tacked on, white tac was used to mask off the “alligator pattern” as shown for option A and Vallejo yellow olive 3j was sprayed over the top. The white tac masks were removed and the plane was given an overall coat of Tamiya gloss clear spray to prepare the surfaces for decaling.

To say the decals that ZM uses are outstanding would be an understatement. The decals for this plane are large and in colors that might worry some about bleed though, but they’re in perfect register and opacity. I used all of them, the yellow leading edges hide the camouflage underneath and the red roundels are red, they don’t turn pink on the white background. I did use some micro set and sol but not much was needed. When ready all was sealed with Tamiya semi-gloss clear and it was on to final assembly

Final assembly involved building, painting, and decaling the propellers and then attaching them to the plane. The rear machine gun was built and attached. I used the last of the PE parts for the gun sights for the machine gun. Then the clear windows, canopies, wing lights, and nose gear light cover were attached with PVA glue. The pitot tube and pilot steps were added. The plane was then placed upside down and the fuel coolers and auxiliary fuel tanks were built, painted and added. The plane was flipped right side up, the canopy masks were removed, canopies officially attached, and the center section top was placed on completing the build.

It has been a truly wonderful build of an amazing kit. Zoukei Mura’s kits have been showstoppers from the beginning, but it seems with each new kit they bring to market they continue to get better. If there was a level beyond “highly recommended” this kit would have that designation.

My most sincere appreciation to Zoukei-Mura and to IPMS for giving me this opportunity to review this amazing 1/32 Ki-45 Toryu “Early Type” kit.