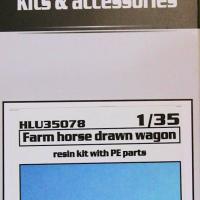 Here is a little history about farm horse drawn wagons. Four-wheeled vehicles have many names – one for heavy loads is most commonly called a wagon.

Wagons can be pulled by donkeys, ponies or mules and other smaller animals are occasionally used, such as large dogs, llamas and goats. Heavy wagons, carts and agricultural implements can also be pulled by other large draught animals such as oxen, water buffalo, yaks or even camels and elephants.

Vehicles pulled by a pair (or by a team of several pairs) have a pole which attaches between the wheel pair.

The kit is produced by HauleraulerHauler, a European company who in partnership with Brengun produce a wide range of kits. They produce construction kits, universal kits, photoetch parts in a variety scales to accentuate other manufactured kits. The box artwork shows a photo of an assembled farm horse drawn wagon.

The kit consists of 18 resin parts on plugs and one photo etch sheet. The parts are nicely molded and the plug gates are reasonable for resin parts. All panel lines are recessed and wood grain detail is impressive. The one page instruction sheet shows the suggested assembly. The photoetch sheet provides chains, hooks, and linkages.

Assembly was straightforward, but care must be taken when cutting the resin parts from the plugs. Proper personal protective gear should be worn when working with resin parts. I found all the parts fit very well and I only used gap filling super glue to attach all the parts together. The only problem I encountered was with the length of the axles. I found them to be a couple of mils too short. I had a problem with the wagon wheels touching the side of wagon. So I cut new lengths of axles from sheet rod to place the wheels outward from the sides of the wagon so they did not touch. But other than that this is a gem of a kit.

I painted the wagon overall brown. I painted all the chains, hooks, and linkages a cast iron black. I did not do any weathering since I do not know as yet what other models I want to group the farm horse drawn wagon with.

There were no decals with this kit.

Overall the kit is a joy to build and builds into a realistic looking farm horse drawn wagon. This wagon could be placed in a nice diorama scene with Wild West, WW1, WW2, Korean, Vietnam, Iraq, or Afghanistan figures or vehicles since the basic design of horse drawn wagons has not changed over the years.

My thanks to Hauler and IPMS USA for the opportunity to build this great little kit. I look forward to building more Hauler kits in the future.