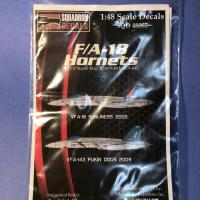 After going out of business after decades of serving modelers needs, Squadron Hobbies has been resurrected like a phoenix from the ashes. Since being purchased by Brandon Lowe, the company has moved from Texas to Georgia, and is quickly reestablishing itself as one of the best mail order hobby shops around. In addition to a growing selecting of model kits, Squadron is also getting back into the production of accessories, including decals.

Printed by Microscale here in the USA (a name I had not seen for some time), this is the second release in the 1/48 scale line, and the second of five current sets for the Hornet (three for the “C” variant, and two for the “E”). The suggested kits are those produced by Revell and Hasegawa, and both squadrons represented on this sheet have blue tails. According to the instructions, the VFA-81 bird sports FS 15042 for its blue while VFA-143 uses FS15102, and both planes represent ones flown in 2009. The instructions are contained on a single sheet of paper that is folded in half, and one section provides “a word about decaling” and “instructions for applying decals”.

As far as my hits are concerned, the decals look great, and match well with images I found online of the real planes. Clearly some thorough research was conducted in the planes represented including the scratch marks and paws on the VFA-143 “Pukin Dogs” plane as well as the blue “danger jet intake” markings. The VFA-81 “Sunliners” plane is also meticulously represented on the sheet.

When I saw the VFA-143 markings were for the squadron when serving aboard the USS Dwight D. Eisenhower, I knew that I needed this for my Revell kit when I build it as this was the first aircraft carrier that I served on. Of course, in my day, the squadron was VF-143 and was flying the F-14A Tomcat. As with any Microscale decal, Micro Set and Micro Sol are almost always adequate for getting the decals to lay down over a glossy surface.

I would like to thank Squadron Hobbies and Brandon Lowe specifically for being gracious enough to provide this decal sheet to the IPMS-USA for review! If you have yet to check out the new Squadron website, I would highly recommend looking to see how it has improved. Thanks to Phil Peterson for obtaining this set for review at the Nationals, and thanks to the folks behind the scenes in the Review Corps who keep the review machine running so well. As always, my final and most sincere gratitude to all who take the time to read this.