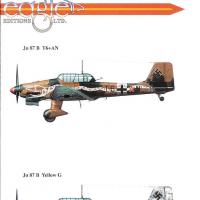 Eagle Editions’ newest release in their EagleCals line covers 2 Junkers Ju-87B-2 Stukas. 1 decal sheet measuring approximately 5 ¼” x 7 ¾” is included, along with a 5 ½” x 8 ½” folded instruction sheet that opens out to 4 times its size.

One of the two subjects is the famous “snake” Stuka flown in North Africa by 5./St.G. 2 in 1941, while the other is of an interesting winter-camouflaged Stuka from an unknown unit in Russia that carries a face within its white camouflage.

Side profiles of both aircraft are included in the instructions – these are produced in full color, and the artwork is done by noted artist Thomas A. Tullis. In fact, according to Eagle Editions’ web site, Tom creates the profiles as well as the decal artwork for all this company’s decal sheets.

Fully opening the instruction sheet reveals a generic plan view of the Stuka to guide in stencil placement, as well as short descriptions of each of the subject aircraft. Painting schemes are described, and references (complete with page numbers) are cited. It is noted that there is a question whether the snake pattern was on the right side of the desert Stuka, since no photos as of yet have come to light showing that side of the aircraft. Eagle Editions has provided the snake pattern for both sides, and the choice is left to the builder.

In addition to the unique markings for each aircraft, enough national markings and stencils are included to cover both aircraft. Since only two schemes are included in this sheet, I am happy to see that this is the case. Personally, I would rather have had more of the sheet taken up with unique markings for additional schemes, as one can easily source German crosses. I would also suggest applying the base schemes to each aircraft (two-tone green “splinter” camouflage over blue undersides), applying the stencils, and then painting the additional camouflage (the Italian sand overspray or whitewash accordingly). I’m assuming most stencils were not re-applied over paint jobs done in the field.

The decals themselves look to be first rate, and I believe are printed by Cartograf. Carrier film on everything I inspected is non-existent, except for very small connecting pieces between code letters and the teeth on the whitewash scheme. There is virtually no carrier film around any of the images otherwise.

In terms of quality of decals and of artwork, these are as good as you get. Is it worth this price for a sheet of just 2 schemes? If you want one of them, then yes it is! I trust Eagle Editions’ research, so I know I am getting the most accurate version of the snake scheme that is out there. I don’t believe the whitewash scheme has been done in decal form before. So I would give this sheet a qualified recommendation.

Thanks to Eagle Editions, Ltd. for providing the sample, and to IPMS/USA for allowing me to review it.