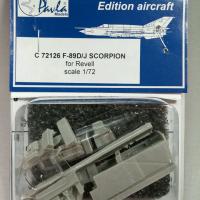 Revell’s 1/72nd F-89D/J came out in the early 90’s and is a great kit. There are really only two shortfalls of the kit; the first being the lackluster cockpit and the second being the multi-part exhaust. Pavla has recently released resin detail parts for the cockpit and the exhaust.

Another area of concern is the vac-formed canopy. The canopy is much taller than the windscreen. If you plan to model your F-89 with the canopy open, then this is no big deal. However, if you like your canopies in the closed position, then you may be better off with the Revell parts.

This is a great addition to the Revell F-89. Whether you are modeling an F-89D or F-89J, the Pavla cockpit is a must have. Thanks to Pavla for providing the review sample and to IMPS/USA for allowing me to review it.