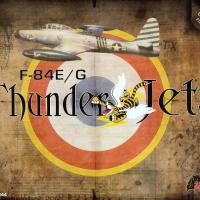 Created specifically for the new 1/32nd scale Thunderjet by Hobby Boss, this is an absolutely beautiful set of decal markings for 2 F84E’s, one USAF and one French version described as follows:

As in the past, the printing, colors and register are pure perfection. The decals are very thin, yet opaque and applied using the Micro products methods to settle down nicely.

Look for the markings from Col Robert L Scott’s aircraft to be used in the kit review of the Thunderjet being done for the IPMS/USA Journal. Many thanks to Eli for the review sample.

Markings included in this set
Previous Next