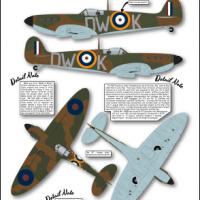 The Spitfire, never has there been such an iconic fighter for a country than the British thoroughbred. Not to be overlooked Fündekals has done up a new sheet on this fighter that covers no less than TWELVE Spitfires from the Mk.I to the Mk.XVIe.

The decals come in a large ziplock type bag. They are on two decal sheets. One is the individual aircraft and fuselage markings and the other has the wing roundels. They are printed by B.O.A. The decals are world class with perfect register, good color saturation, thin and a joy to work with.

But where are the instructions? You have to download them from the Fündekals website. This does a couple of things, the most important one is to keep costs down and allows more money to be spent on the amount of aircraft included. It also allows Fündekals to include plenty of reference photos and history on each aircraft. The instruction booklet is full of great reference snippets and photos. Things like the factory installed mirror. Unit information and pilot information to go along with the decals. There is a lot of research that went into each subject aircraft.

There are some famous fighters in here. The ones that stick out to me belong to No.610 Squadron and marked with DW from the famous photos taken before the Battle of Britain. There are three aircraft in the formation with DW-O being commonly done in decal form. The other two aircraft DW-K and DW-Q are often overlooked until now. K had the same oversized markings but Q had the traditional normal markings. There are pictures of each airplane included.

Another airplane that sticks out to me is the inclusion of Eagle Squadron F/O Dick Patterson with his unique dice and Ace of Spades card on the tail band. He actually died on Dec.7, 1941.

There are some other American Spits in there as well as a few notable British ones as well. Many Wing Commanders are included such as ‘Al’ Deere and ‘Birdie’ Bird-Wilson. The color schemes run the gambit of Dark Green/ Dark Earth/ Sky Blue to Sky grey bellies to Dark Green/Ocean Grey/Medium Sea Grey and invasion stripes.

There is something here for every version of Spitfire up to the Mk. XVIe. So if you have an Eduard, Airfix, Special Hobbies, or Tamiya kit there is something here for you to decorate it with. The level of research is impeccable. The decals are world class as is the research. You can tell that Fündekals enjoys the research portion and has a passion for getting it correct. It shows in their instructions and their decals. Another winning combination for Fündekals.

Thanks to Fündekals and IPMS/USA for the review copy. You can obtain your copy directly from Fündekals at http://www.Fündekals.com/ . While there check out all their other sheets. Everyone is well worth your investment.