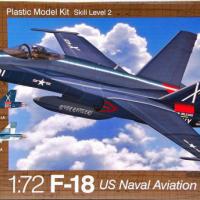 The F/A-18 was ordered for the United States Navy and Marine Corps as an all-weather, supersonic, aircraft carrier-capable, multi-role aircraft. It was first flown in November 1978, and introduced into service in January 1983. The F-18 has a proven track record so effective that it’s still used in the fleet as fighters, attack bombers, and airborne electronic warfare systems aircraft.

My sample arrived in a small rectangular box featuring a very cool painting of a retro 1950s painted Navy Hornet. The kit consists of 60 parts in grey and 1 part in clear, the panel lines are raised, and there is a fair amount of flash present. The old molds are starting to show their age. The instruction sheet is clearly printed b&w booklet. This kit features a unique decal sheets with two options:

The build is simple and straightforward but it will challenge your modeling skills. So let me explain the trouble spots of the kit. First off, the fuselage fit is awful and requires a lot of putty work to make presentable. Then more putty is required around the intake section in order to fill the large surrounding gaps. The main landing gear area is the next big problem. The landing gear legs and doors have a sloppy fit, making keeping them in place while the glue sets annoyingly difficult. The next issue is setting the canopy in place, first the ejection seat sits up too high, not allowing the canopy to set. After that’s corrected (pull it out, cut it down and reinstall it), the canopy still didn’t fit properly and needed filling around the sills. The wings, horizontal, and vertical stabs all proved difficult to square up. After a couple heavy coats of high-build primer and a classic paint scheme I guess the old girl looks okay.

Thirty five bucks seems a bit pricey for such an old kit but the decals are awesome.

Thanks To Minicraft and IPMS for allowing me the opportunity to build and review this model kit.