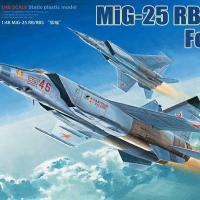 The Mikoyan-Gurevich MiG-25, NATO reporting name Foxbat, is a supersonic interceptor and reconnaissance aircraft that was among the fastest military aircraft to enter service. It was designed by the Soviet Union's Mikoyan-Gurevich bureau and is one of the few combat aircraft built primarily using stainless steel. It was the last plane designed by Mikhail Gurevich before his retirement.

The first prototype flew in 1964, and the aircraft entered service in 1970. It has an operational top speed of Mach 2.83 (Mach 3.2 is possible but at risk of significant damage to the engines) and features a powerful radar and four air-to-air missiles. When first seen in reconnaissance photography, the large wing suggested an enormous and highly maneuverable fighter, at a time when U.S. design theories were also evolving towards higher maneuverability due to combat performance in the Vietnam War. The appearance of the MiG-25 sparked serious concern in the West and prompted dramatic increases in performance for the McDonald Douglas F-15 Eagle then under development in the late 1960s. The capabilities of the MiG-25 were better understood in 1976 when Soviet pilot Viktor Belenko defected in a MiG-25 to the United States via Japan. It turned out that the aircraft's weight necessitated its large wings.

There are 14 grey sprues, one small clear sprue, fuselage top and bottom halves, a small PE fret, a separately packaged set of resin parts including two pilot figures and the landing gear struts, plus a set of decals. The resin parts are packaged in a clear vacuum-formed clamshell.

The first step is the ejection seat: three plastic parts plus a PE Harness. Simple and quick and ready to paint.

The cockpit proper has nine plastic and two PE parts. Once everything is assembled it is time to paint. The instructions note the color as "air superiority blue", while the decals for the instrument panel and side consoles are emerald green.

When I first started to review the box contents I saw that the undercarriage was formed from resin rather than plastic, and this caused me a bit on concern that the parts may not be strong enough to support the finished model in the long term. My second concern was the instructions show the undercarriage trapped between the gear well sides early in the construction and assembly process. This looks like a recipe for possible disaster. However, the nice part about using resin is there were no mold seams on the parts. Upon a closer examination, I realized that Kittyhawk had cast the resin around a metal rod for the wheel's axels. No question the resin/metal rod parts would be more than adequate to support the model. I still elected to leave the gear off until later in the assembly to facilitate painting. If I were to build this kit again I would install the gear per the instructions.

Each wheel is made from two halves, and each mating surface needed to be cleaned up for a tight fit to avoid a radial seam in the rubber portions of each tire. I did apply a coat of Mr Surfacer 500 on the seams and sanded them smooth. I have noted on Internet images of modern Russian aircraft how worn the wear surfaces of the tire appear. This would be a challenging weathering effect. Kittyhawk did not include wheel hubs on any of the wheels to close off the outside axel openings. I punched out small discs and glued them in place to correct this.

Step 9 of the instructions address the afterburner and exhaust nozzles assembly. Each afterburner is comprised of a top and bottom half, and the mating surfaces require some cleanup and sanding to provide a relatively flush fit. Even so longitudinal, slightly open seams result from the join. Once the solvent had dried I applied a bead of acrylic putty to the length of each seam and removed the excess with a damp Q-tip. The afterburner rings are made from three parts and were not installed until after the parts were painted.

The exhaust nozzles may be made from either five plastic parts or one optional resin part. Upon examination, I saw the resin nozzles were better detailed than the plastic parts. I did assemble the plastic parts for a better comparison. The fit of the plastic outer petals was a bit questionable as they appeared to set too far forward. After a tricky assembly, I found the plastic parts would fit together just fine but is just took some planning and effort. I used the resin parts in this build.

Two resin exhaust covers are also provided as an option. I planned to put a lot of effort into painting and weathering the exhausts interiors and did not want to conceal my efforts, but I did paint the covers for the finished model to set in place on a temporary basis. Each cover is fitted with two resin hand pulls. Six hand pulls are provided and require careful removal with a micro saw.

The forward section of the fuselage traps both the cockpit and nose wheel well and slips into the nose camera compartment. The two halves result in a seam on top and bottom. The resin camera bulkhead required a bit of sanding on one side edges before the fuselage halves closed tight. The two engine intakes mount on each side of the cockpit assembly. This assembly will be fitted later to the main fuselage addressed below.

The larger aft section of the fuselage requires the installation of the main gear wells and the engines. The gear wells must be clamped in place while the solvent cures to provide a tight fit all around. The engines have mounting tabs to assist in correctly mounting the engines. Much later in the build, I found the engines set too far to the rear, thus creating a fit problem with the resin exhausts.

When test-fitting the top of the main fuselage with bottom half I noted some irregularity in the horizontal seam that would require some filling and sanding with the resultant loss of detail. I used short pieces of .125" by .125" Evergreen stock for a long shim between the right engine and fuselage and a cross brace to address fit issues on both sides near the center where the fuselage and wings meet. That did not quite work that well as a horizontal step made its presence known.

Fitting the cockpit/intakes assembly to the main fuselage proved to be a contortionist's challenge, but it did fit.

The main parts of each wing is made from a top and bottom panels, with the bottom panel fitting into a recess in the top panel. The sprue attachments are of tree trunk proportions and required a micro saw for removal. I started with the left wing and test fit the parts, removing any little attachment spurs that conflicted with the fit. Once the solvent had cured I found a step at both the forward edge and the tip. Granted this is on the underside and would not be seen, however, I did find this objectionable. For the other wing, I fixed a .010" by .040" Evergreen strip at the front and tip of the recess. The dry fit was much improved. The wing tips are separate parts that fit the main wing a saw-tooth joint. This needs careful filling and sanding to eliminate the joint.

The two vertical stabilizers are built up from four parts each: the main stabilizer, the stabilizer tip, a base housing, and the rudder. The tips require care in fitting and gluing to minimize the join. The rudders need some sanding to fit properly, and the housing is no problem to fit and glue. Each vertical stabilizer has two tabs that fit into slots in a shallow, formed recess on the top of the fuselage. The outside of the join results in a noticeable gap that requires filling. It appears the bottom contour of the rudder does not quite match the edges of the fuselage recess. The gaps were filled with an acrylic putty.

I planned to fit the model with gravity bombs and the R-60 air-to-air missiles. The instructions show the assembly of the missile rails and pylons, but it took some searching of the trees to find the correct parts. The bombs and ejector racks had no instructions, so I was on my own. The bottom of the fuselage has a molded-in opening for the large centerline fuel tank, but the bomb pylon mounting tabs do not align with those openings. New opening locations for the bomb pylon must be eyeballed and opened before the pylon may be fixed in place.

When comes time to fit the bombs to the centerline rack I found the lack of proper instructions led to the front and rear bomb shackles being too closer together, and the bombs would not fit on the rack. The centerline tank was used in place of the bomb rack.

For such a large aircraft the canopy and windscreen are really quite small. The kit parts were separated from the sprue with a razor saw and cleaned up. Both parts are fairly clear and nicely molded.

Two standing pilot figures are included. The figure in the pressure suit appears disproportionately long-legged while the other figure appears more proportional.

The decals slid off the paper backing after less than a minute of soaking in warm water. The decals are a bit thick and glossy and did not react with any decal solvent. Silvering was a big issue with the application.

First, this is the third Kittyhawk model I have built. After the first one, I swore I would never build another kit from this manufacturer. However, I relented and the next kit was their Su-17 which was a vast improvement over the earlier misadventure and was a real joy to build. Now the MiG-25RB/RBT was the most complicated of the three, but in the end, was worth the effort. This kit will require some planning to eliminate potential problems later in the assembly.

Testing fitting of all parts is recommended before the solvent is applied. Trimming of tabs and slots is sometimes required to facilitate the fit and assembly. Raised ejector pins need to be removed when visible on the finished surfaces. The engine's intakes lack internal trunks and open into the fuselage cavity. I added some scratch-built FOD cover to cover that sin. The separate wings tips could have been addressed better by Kittyhawk by eliminating the sawtooth joint and molding the parts along a natural panel line. Some filler is required at various joins, most notably at the fuselage and vertical stabilizers. The resin parts make a nice addition to the kit.

Panels lines are well defined on all exterior surfaces. The resin parts are a really nice addition to the kit and provide some nice detail. The two cameras are very nicely detailed, but that detail is lost once the cameras are placed inside the nose camera compartment. The decals were a real disappointment due to thickness and silvering. They should be replaced.

I wish to thank Kittyhawk and IPMS USA for the opportunity to build and review this kit. I have wanted to build a MiG-25 for quite some time, and this was worth the wait. Overall this was an enjoyable build. There are a lot of parts involved and some planning on when and what to paint before the parts and subassemblies are glued together is necessary.

Thanks to Wikipedia for the background information.