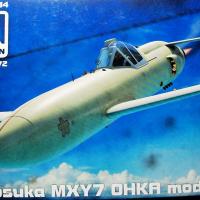 Brengun has released a few different kits of the Ohka and in several scales. This is the latest which is the Model 22 and in 1/72 scale. This was a purpose built rocket powered Kamikaze attack aircraft. It was used against allied ships towards the end of world war two.

The sprue is well molded with very little flash and great detail. The resin parts are to allow you to make the three aircraft wooden stands used to support the aircraft ready for fitting to the carrier aircraft.

First is the construction of the cockpit the one half of the fuselage which is well detailed for the scale. I did add some more detail to the instrument panel as it needs some to give it more realism.

The next stage is the addition of weight in the nose, which I do feel was not required when mounting on the provided wooden stands. The fuselage joins need a little filing and you need to be careful lining it up correctly.

Next it’s on to the tail assembly which is very simple.

Some fuselage details are added next followed by the wing assemblies.

Now you add the wings and canopy. The canopy needed to be aligned by some cleaning up of the fuselage so the fit looked better.

The resin stands are assembled next, two for the wings and one for the rear fuselage. They were a little fiddly to assemble.

Last was painting and decals, the kit only gives you one option to build and only uses a few of the supplied decals.

This was a very nice and simple kit and was fun to build. I will keep it to one side and build a Mitsubishi G4M2 Betty, that I have in the stash to do a diorama.

Thanks go to Hauler/Brengun for providing this kit to review and IPMS USA for allowing me to review it for them.