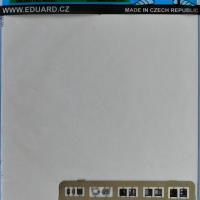 If you are looking for some improved detail, and a quick way of handling cockpit controls painting for your F-14D, then Eduard has once again come to your rescue! This set consists of two PE frets, one being the Zoom set for the cockpit placards and one for additional cockpit and canopy details. Modelers with experience adding photo-etched details will have no issues utilizing this set.

When Tamiya released their 1/48 scale F-14A (kit 61114), which I immediately had to add to my stash, the parts layout led me to believe that a “D” model would likely follow. Just in time for the 2018 IPMS Nationals, Tamiya did indeed release kit 61118, of the ultimate F-14, which was also quickly added to my stash. While Tamiya did a fine job in rendering the cockpit and canopy details in plastic, this PE set makes quick work for representing the various panels with pre-painted items, and improves and also adds details to the canopy.

Upon opening the standard Eduard plastic envelope, the modeler will find two PE frets, with one being a pre-painted and plated fret, while the other is plain brass along with a single sheet of paper with instructions on both sides. The pre-painted fret is the Zoom set with the placards for the cockpit and the brass fret has extra cockpit wall details, as well as items for the turtle deck, canopy rails, and rearview mirrors for the pilot and RIO along with improved detail for the canopy and windscreen edges. As I have yet to decide the final position of my canopy, I did not add any of the parts to the canopy itself during this review.

I started the cockpit by adding the detail parts for the canopy walls and then airbrushed everything Model Master Acryl Dark Gull Gray (FS 36231), which I also applied to the various panels that would later be added. I will mention that the gray used by Eduard on their pre-painted items is a much lighter shade than FS 36231, which can be seen in the photos (I will touch these items up later). The panels all require removal of the molded details prior to adding the Eduard parts, and I used a knife and file for this work. I did paint the canopy items for the canopy and windscreen edges as well as a strip that includes the RIO’s rearview mirror with Badger Stynylrez Black and then used a Molotow Chrome marker for the mirrors.

While there are a few small items in the set that represent moving controls (levers), modelers with some experience with small photo-etched items will not find these too difficult to add to their model. Overall, I would highly recommend this set to anyone wanting to simplify the painting of the cockpit details for their F-14D, as well as add and improve details to the canopy.

I would like to thank the folks at Eduard for graciously providing this set to the IPMS-USA for review and to John Noack for allowing me to receive this set. I would also send kudos out to the assistants in the Review Corps for the great job they do in keeping the Corps running strong and as always, my appreciation to anyone who takes the time to read my comments.

Canopy frames with mirrors
Previous Next