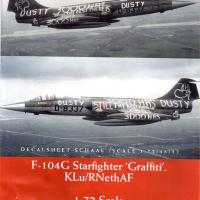 I received the Dutch Decal sheet for the F-104G Starfighter ‘Graffiti’ KLu/RNethAF and found that it was a supplemental sheet. It only came with the graffiti and code for # D-8337 and a second aircraft that isn’t covered by as much graffiti, D-8063. The instructions state that this sheet is a supplement to sheet #72069, or you can do like I did and piece the rest out from other decal sheets. All of those extra decal sheets just come in handy sometimes.

The instruction sheet is very good and shows a 4-view drawing of the aircraft with decal placement. I went to the web site to check out sheet # 72069 because this sheet has a second option that has a small graffiti on the tail with a small tail number but no large D # up front. After checking out the other sheet I noticed that they have all the numbers to make any of their aircraft.

I was working on an F-104G so these decals came in handy, and since they looked so unusual on this paint scheme, I just had to do them. I especially liked the cartoon caricature on the tail. First, I always put Future on the model, and then I use the Mico Set and Sol decal solutions, which did seem to work well. The only problem I had was that the decals didn’t seem very durable and started to break when I tried to slip them in place. I also noticed that once they are on the model you better make sure they are where you want them because they aren’t going to budge. I was discussing my problem with one of my friends and he suggested brushing some Microscale decal film on the others to see if that helped. After doing that I had no further problems and was very happy with the result.

Why did I have such problems? Was it the Future? Could it be that because I live in Arizona and the decals had to sit in an oven of a mailbox in 110 degree weather? Or just a bad day, because we all know that can happen. I’m not sure, but I’ll have to try another set to see. At least I was able to fix the problem and I think my model came out pretty good.

Yes, I would recommend these decals because other people may not experience the same problems I had and the model did come out looking good. Thanks to Dutch Decal and IPMS USA for the review.