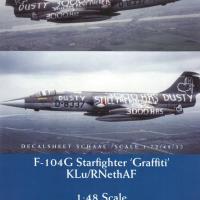 This decal sheet is a “supplementary” set, meaning that it contains the “graffiti” used to mark up a specific F-104G, that being # D-8337. The markings inside the package do not include the national insignia, data, stencils, and other standardized markings that one would most likely find on any F-104 flying in the Royal Netherlands Air Force. Existing Dutch Decal markings that can be used to mark your F-104 prior to the “graffiti” being added is a product from Dutch Decal, product number “DD48043”. Just so you’ll know, these same markings are available in 1/72nd scale and 1/32nd scale, including the supplementary graffiti sheet.

The broadside, or “instruction sheet” if you will, included in the product package, contains a 4-view drawing that illustrates the location of the graffiti markings. While there is some text in English, you simply do not need any of the text to locate and apply these decals.

A sample taken from the sheet reacted well to SolvaSet and also Micro Set. The decals had sufficient strength to allow some nudging into the correct placement and orientation. The decals snuggled down nicely over surface detail as well. I experienced no “silvering” on the sample but that may not be the case for some of the larger markings with all of that clear carrier film. The decals, due to the size and shape of the markings, contain much clear carrier film. Trimming some of the larger pieces is definitely advisable, just to be on the safe side. This step is advisable, not because of a fault with the decals, but because of the fact that large clear areas of carrier film may trap air more readily than a decal that has been trimmed.

I found this product to be of high quality, with no defects or issues. This product is highly recommended.

Thanks to DutchDecals for the review sample and to IPMS/USA for the opportunity to review it.