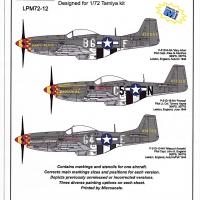 Decals designed for Tamiya P-51D, but should work for any 1/72nd scale kit.

There are more 'new to me' companies out there than I can shake a stick at. One such company is LPS Hobby from Brazil. This group has been making after-market decals sets for a 1/72nd scale aircraft for some few years now.

[On a side note: Being part of the IPMS/USA review corps affords the opportunity to get your hands on some of these company’s items without added expense or well... any expense. Something to think about.]

The subject of this missive is two sets (Part One and Two) of after-market decals for USAAF camouflaged P-51D's. The subjects are all from the 363rd Fighter squadron, 357th fighter Group stationed at Leistin, England in 1944.

The specific aircraft included in Part One are:

The aircraft featured in Part Two are:

All of the decals have been printed by Micro Scale and are on carrier film with a minimum of border. One nice touch is the kill markings are done as overlays. The background is one decal and the actual kill mark is another decal that is placed on top. Winds up giving markings that are in register without any bleed through.

As noted in the instructions, these aircraft were all delivered in a natural metal finish that was over-painted by the end user. As such, most of the stencils were covered up which is why there’s a minimal amount of stenciling included in both sets of decals. While LPS Hobby doesn't include much in the way of stenciling for the aircraft, they do provide all the requisite stenciling that was found of the drop tanks as well as all the stenciling found on the prop blades. Sweet!

Something that attracted me to these decals sets in the first place was that they are for camouflaged P-51's. Mostly because I can't do a natural metal finish justice. Some might argue that I have issues with a decent camo finish but that is just 'fake news'.

Both of these decals sheets are beautifully printed by Micro Scale with thorough application instructions that include a number of well researched historical notes. One that caught my eye was the kill markings on Pilot Lt. Col. Tommy Hayes P-51. He was credited with two Japanese aircraft while stationed in the South Pacific as well as nine German planes during his stint in England.

If you have a love for the P-51 or just looking for markings a bit different than what comes in the box, then these 1/72nd scale after-market decals sets are just the ticket

My thanks to LPS Hobby and IPMS/USA for the review copies. Obrigado!