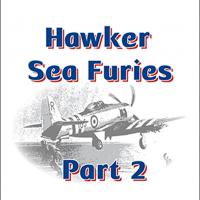 I have a couple of Trumpeter and the Hobbycraft versions of the Hawker Sea Fury in my growing stash, waiting for a rainy day project to come around. I really like the brutish appearance of this big five-bladed prop driven monster. I‘ve had my eye on the Fundekals Sea Furies sheets for a while, with their collective choice of 18 different sets of markings for the type. I purchased several Barracuda Studios aftermarket goodies for the Trumpy kits, planning to do the colorful Canadian Navy Arctic Research version from the Pt I sheet, and maybe one of the Australian Navy blue birds from the Pt II sheet.

When Airfix announced their version of this aircraft, and it came up for grabs from the IPMS review stash, I jumped at the chance to do a review build as a warm-up for and comparison to the others. John Noack had been given the Fundekal’s Sea Fury Pt. 2 decal sheet at last year’s Phoenix Nats for review. He emailed an offer to use them as I was in the middle of the Airfix build. You can find my concurrent review of the Airfix kit build elsewhere on the IPMS Reviews website. I already had the Part I sheet (Sea Furies of the Royal Canadian Navy), so I also built up the Hobbycraft kit as a side by side comparison, and decided to use the two kits for the schemes I favored. The Sea Fury’s colorful history is well known and extensively documented, so let’s get on with my impressions of this 1/48 scale decal set.

The Sea Furies of the Royal Canadian Navy sheet allows you to build your choice of ten different RCN airframes, as follows:

The Sea Furies Part II decal sheet allows you to build your choice of eight different airframes, as follows:

After masking the windscreens and canopy covers with Tamiya masking tape, I temporarily affixed the closed sliding canopies with some liquid masking medium, and proceeded to prime the airframe with Tamiya Primer. A coat of Testor’s Acrylic Yellow Zinc Chromate Primer went on the wheel wells and insides of the gear doors.

A few of days later, I shot a couple of coats of Humbrol “Oxford Blue” enamel over the entire Airfix airframe. The Hobbycraft kit was painted with Vallejo Acrylics in Extra Dark Sea Gray and Sky. The red conspicuity markings were painted with Tamiya Red.

After the color coats cured for a few days, I built up several light mist coats of Pledge Future Shine to prep a shiny surface for the Fundekals. The flat surface of the Humbrol enamel paint soaked up a significant quantity of Future before becoming suitable for the decals. I worried that the significant layers of clear acrylic would fill in much of the surface detailing, but I find Future to be really forgiving in that respect. It really shrinks up tight as it cures, and the detailing was fine. The Vallejo/Tamiya acrylics on the Hobbycraft kit took only a couple of coats to build up a suitable shine.

After the sealer coats of Pledge Future had cured for a couple of weeks, I applied the Fundekals and the kit stencils, all of which performed perfectly following a light touch of SolvaSet to settle them into the fine surface detailing. Full disclosure … I bungled the roundels on the RAN blue bird on the first go-round by not paying close attention. Australian roundels always have the kangaroo silhouette facing forward, and I had both of the fuselage and both of the wing top markings facing backwards. After lashing myself with wet decal paper, I proceeded with a final layer of Future to set the decals, and waited hopefully for a reply to my plea to Fundekals for an additional set of RAN roundels. A few days later, Wally kindly sent me the six roundels from his personal stash sheet. I overlaid them in the correct orientation, and proceeded with a final light coat of Future to seal everything up prior to weathering.

Check the scan of the sheet in the photos below, and you’ll see that all markings are in perfect register, and there is little to no carrier film visible to cause the dreaded silvering effect. The decals slid very easily off the paper backing after sitting on a paper towel for about 30 seconds, after dipping them in warm water. They were easy to place and move around slightly before pressing them into place with a wet Q-Tip.

The remaining sheets will go in the box for the two Trumpeter Furies. I can see a Dutch version and probably one of the orange/red birds becoming future builds. Very highly recommended, and very reasonable price points at $15.00 for the RCN sheet and $16.00 for the Pt II sheet. Order from the Fundekals website or your favorite hobby shop today.

Thanks to Fundekals and the IPMS Reviewer Corps for the opportunity to review this kit. Huge kudos and thanks to Wally at Fundekals for donating his Roo roundels to fix my screw-up!