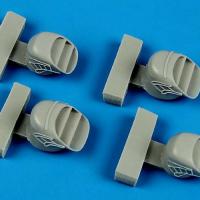 These resin parts are designed to replace the exhaust nozzles in any of the first-generation Harrier kits from a number of manufacturers. They are advertised to fit the Italeri and Hasegawa Sea Harrier FRS.1 and the Italeri and Hasegawa Harrier GR.3. Since the Italeri kits are reissues of the ESCI AV-8A/GR.3 and FRS.1 kits, these parts will fit those kits as well. They will also work on the Fujimi AV-8A kit, as that is a copy (not a reissue) of the ESCI kit. These are first after market nozzles available for the first-generation Harriers, although similar items have been available for the second-generation Harriers (AV-8B, AV-8B+, GR.5/7/9) for some time by a variety of manufacturers. They are not the same.

Since I am working on a collection of Harriers, I just happened to have a stack of these kits lying around, so I was able test fit the nozzles on a variety of them. The photo 3 shows how necessary these replacement items are. The Hasegawa nozzles have only representations of the control vanes molded on a solid part. They have to be carefully painted to look right, and even then they are not fully satisfactory. The ESCI/Italeri nozzles have the vanes molded open, but the nozzles are split in half, presumably because open nozzles would be too hard to manufacture as one piece.

I persuaded our review moderator to give me these review items with the promise I would use them on a YAV-8B prototype model I was working on. As it turned out, the YAV-8B prototype did not use the first generation nozzles in spite of having a fresh off-the-assembly-line AV-8A fuselage. It used forward nozzles that were eventually adapted for the production AV-8B. (The rear nozzles are much the same for both types).

In order to satisfy the requirement to use the parts in an actual model, I decided to advance my construction of an AV-8C. This was an interim design adapted as a stop-gap while the AV-8B testing was being completed. The AV-8C was essentially an off-the-shelf AV-8A with a more powerful engine and a few of the aerodynamic refinements scheduled for adaption on the AV-8B. I used the Fujimi kit, mostly out-of-the box, with the Aires nozzles and the strakes from the Hasegawa AV-B+ kit that had already sacrificed its wings to the YAV-8B project. The nozzles were prepainted with Alclad steel, and the rear nozzles overpainted with Alclad Jet Exhaust and a touch of Modelmaster Flat Black. The plastic of the Fujimi kit is slightly thicker than the ESCI kit, so the fairing around the nozzles had to be cut back slightly before the nozzles would fit into their recesses. The painted nozzles then clicked into place with no gluing necessary.

I was extremely pleased with these parts and I thought they made a significant improvement over the kit items in each of my test subjects. I fully intend to seek out additional copies for future additions to my Harrier collection.

My thanks to Aires for supplying the review items.