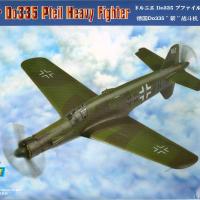 The Do-335, like many German aircraft of World War II, had a checkered development. It began its life, at Hitler’s insistence, as a high speed bomber, and only later, when Hitler was told that the Me-262 would be a better high speed bomber, was the plane’s basic mission changed to that of heavy fighter and reconnaissance.

First, Dornier used a scaled down (1/2.5) Do-17Z airframe (Goppingen Go.9) to test the feasibility of the rear mounted engine with a prop behind the tail unit. Tests showed the usefulness of the arrangement, so design began on the full size airplane. Featuring a tandem engine arrangement (which was not new to Dornier), the aircraft was a large, single seat, twin engine aircraft with two DB-603 liquid-cooled engines. The type began as a high speed bomber (Nov. 1943), reconnaissance fighter and night fighter (Jan. 1944), and ended finally as a heavy fighter (Mar. 1944). In July, 1944, the first prototypes were delivered as bombers.

A two-seat development was also built, intended as a trainer and night fighter, and several variants were worked on, although by the end of the war only about 27 production models and prototypes had been constructed, and 15 to 25 nearly completed airframes were captured by U.S. Forces at Dornier’s factory at Oberpfaffenhofen. Several examples were collected by U.S. and British intelligence teams after the war, and a number of accounts of test flying exist. Several were brought to the U.S., and others were tested by the British and French. Most either crashed or were scrapped. Only one survives today, Do-335A-0, w/nr. 240102 (VG+PH), which was captured by the Americans at the Dornier factory and later tested by the Navy before being stored at Norfolk and Patuxent River before going into storage at Silver Hill, MD. It was later sent back to Dornier in Germany for restoration, and is now on display at the NASM. Decals are provided for this airplane in the kit.

Actually, the postwar history of the aircraft is as interesting as its wartime career, since the type was not issued to any fighter units, and only one was used by a reconnaissance unit, the long Distance Reconnaissance Group Obdl. This was Do-335 V3, CP+UC, which flew briefly as T9+ZH before it was damaged by Allied aircraft and forced to land near Reims in late 1944.

The subsequent history of the Do-335s is well covered in Phil Butler’s excellent book War Prizes: An Illustrated Survey of German, Italian, and Japanese Aircraft brought to Allied Countries during and After the Second World War. This is a fascinating book and should be in any serious aviation enthusiast’s library. It tells how the aircraft were evaluated and how their code numbers were developed. The Heinz Nowarra softcover book from Schiffer on the Do-335 is also useful, and this contains many detail photos.

One interesting fact about the Do-335 was the installation of one of the first ejector seats, mainly because the process of bailing out of the plane risked injury or death if the pilot hit the rear propeller. Capt. Eric Brown, in his book Wings of the Luftwaffe, states that the handles on the ejector seat were attached to the airframe, and that when several pilots had to eject, their bodies were later found without arms, as these were torn away when the seat rockets fired. Capt. Brown said that when he flew the airplane, ejection was not an option. That’s why he’s over 90 now, and still alive.

This kit comes with a typical set of Hobby Boss instructions, a small folded sheet which provides a good color view of the model, a sprue diagram, 7 detail assembly drawings, and a four-view color drawings giving marking and camouflage details for one aircraft, which they identify as Do-335A-1, 102, VG+PH. This is actually Do-335A-0, which is now in the Smithsonian at the NASM. The decals are shiny-finished but of good quality, although the fuselage crosses go over the exhausts, requiring cutting the decal in half. There are a few maintenance markings, and the splinter pattern of 81/82 coincides with that given in Smith and Gallaspy’s Luftwaffe Colors, Vol. 3.

The kit consists of 39 light grey plastic parts and one clear canopy. It is packed in such a way as to arrive at its destination undamaged, and you’ll need a pair of wire cutters to get the parts out of their packing. It is a highly simplified kit, with the upper fuselage half and the wings with the lower fuselage as the two major sections. The lower vertical fin and the tailplanes are separate units, as are the front engine radiator housing and the propellers. The cockpit interior consists of a control stick and seat, while the instrument panel is merely the front of the cockpit. By the way, this model must have been Reichmarshall Herman Goering’s personal aircraft, as the seat in the model is, in scale, not less than 2 feet wide (no kidding!) I used a smaller seat from the spares box. But wait! There’s more!

The propellers are absolutely hopeless. They are of different sizes, and the front prop rotates the wrong direction, as did some British aircraft. The rear prop is a bit better than the front one, but I decided to go to the spares box and locate a set of props from an old Lindberg kit from the sixties, and these are right on the money. The kit’s rear prop could probably be used, but the airfoil section of the props would be backwards, as props are normally more rounded towards the front, and flat on the rear surface. The Lindberg props solved the problem.

Assembly is quick and easy, and very little filler is needed. The landing gear is very robust, and if you follow directions, becomes very strong when finished. However, and this is NOT mentioned in the instructions, fill both nose sections (top and bottom) with something heavy (I used shotgun pellets held in with white glue) or the airplane will sit tail-down. Be careful not to break off the pitot tube on the left wingtip. That would be better left as a small part to be fitted in after assembly.

Once assembled, mask off the canopy and wheel wells and the plane is ready for painting.
I painted the undersides first with RLM 65, followed by the upper surfaces with RLM 81 and 82 greens. The props should be RLM 70 green. Decals went on easily.

I have built only the Frog and Lindberg Do-335 kits, and not the ones made by Dragon or any of the cottage industry kits. This kit is easily the better of those two, as it seems to be accurate, the panel lines are finely recessed, and the parts fit together extremely well. The only real problem is the props, but once that is solved, it is an excellent kit. It is a little more involved that the average Hobby Boss kit, but still, a very inexperienced modeler could do well with this kit. Highly recommended.

Thanks to Squadron and IPMS/USA for the review kit.