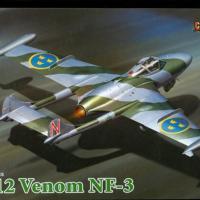 The DeHavilland DH-112 Venom NF.3 was a night fighting development of one of the RAF’s original jet fighters, the DH-100 Vampire, which entered squadron service in 1949. Used as a fighter and ground attack aircraft, the Vampire was developed into the Venom fighter bomber with revised wing form and increased power, raising the maximum speed from the 540 mph. range to the 630 mph. range for the NF.3 variant. The crew sat side-by-side, and the wing had sweptback leading edges. A total of 129 Venom NF.3’s was built, and these were operated by several RAF squadrons starting in 1953 until they were replaced by Gloster Javalins in 1957. Several Venoms of various marks were exported to Sweden, New Zealand, Iraq, Switzerland, and Venezuela.

Cyber-Hobby has already issued kits of the Vampire and Sea Venom, so some of the sprues are also used in these kits. The fuselage and rocket rails are new, however. Consisting of over 100 parts molded in soft grey styrene, not all are to be used, including parts for the Sea Venom. The parts are nicely molded, with very little flash, and the cockpit is especially good, although the details are somewhat obscured by the thick canopy. A very detailed engine is provided, although it becomes completely invisible unless you want to chop major panels out of the fuselage to show it off. Two small PE parts make up the wing fences.

The instructions consist of a long, three-fold set of drawings which include a copy of the box art in black and white, a sprue diagram, a color chart, the usual lawyerese warnings and safety precautions, eight exploded assembly drawings on three sheets, two three views showing RAF and Swedish markings and camouflage, and a short dissertation on how to apply decals. One problem is the fact that the interior color details are a bit confusing, but I was informed by my RAF expert that the cockpit interior was matt black, while the landing gear, wheel hubs, doors, and wheel wells were aluminum.

The decal sheet is well done, on register, and the individual markings do not need to be trimmed. This saves a lot of work, although the underside serial numbers on the RAF version need to be applied and lined up individually, but this eliminates the clear edges that are sometimes such a problem on these models. Keep in mind that the last digit on both serials is located on the outer landing gear door, but it fits without trimming, and the results are excellent.

Assembly is relatively simple considering the complexity of the kit, but I question the order they suggest. The major assembly problem is the fuselage, since both the upper and lower assemblies need to be trimmed off at the rear, with replacement parts then attached. Naturally, these don’t line up exactly, and I had to work for a while to get the rear fuselage to go together right, and it eventually required some filler to get an acceptable form. One of the problems is that the engine assembly seems to be slightly too big, and some trimming is needed. . There are some flaps and other small parts that need to be attached, but I certainly wouldn’t attach the landing gear, wheel well doors, and rocket rails on the fuselage bottom before joining the top and bottom. Do, however, drill the holes so these parts can be attached later. Likewise, I didn’t use the small wheel axle caps, but just joined the wheel halves together, to be mounted on the gear struts after the airplane was assembled.

The cockpit goes together easily, and I painted the whole thing after it was completely assembled, although I added the decal for the instrument panel before installing the cockpit in the airplane. I did however, follow their advice and added some weight to the nose, both forward fuselage and nose radome, before I completed the fuselage assembly.

There were a few parts that didn’t seem to have a function, like parts C13/14 on the wing upper surface, and C35/36 and C5-8. I really don’t know what they are supposed to be, as they don’t seem to show up on the drawings.

The basic assembly went rather smoothly, and the wings and tailbooms were very well designed. Although the wings were folded on the Sea Venom kit, and all of the parts are there for the folding wing version, the RAF version had fixed wings, and these are achieved by simply gluing the wings together. I even lost one of the small mounting units that goes inside the wing, but the wing went together in a very strong structure, and is very sound now, although I might not pull more than 4 G’s in a tight turn without my hand on the ejector seat handle.

It uses WWII colors, dark grey and dark sea grey over medium sea grey, all good Model Master shades. I masked the canopy with masking tape, and after a layer of Glosscote, the decals were applied. This was an easy task since the decals need no trimming, and even the small maintenance markings went on effortlessly, although there were some decals, mainly small maintenance markings, that are not mentioned on the decal sheet or the instructions.

One detail is the small taillights that go on the rear of the tailbooms. These are clear plastic pieces that are very easy to lose. I merely took a drop of clear white glue and placed it where the part was supposed to go. It looks just as good, as those pieces are just too small.

Once the decals had dried, another coat of Glosscote sealed the decals, and the canopy masking could be removed. The result is another postwar jet fighter I thought I’d never build, one that was in operational service at the time I was in high school.

This seems to be the only kit in town of this aircraft, and since it fills a gap in my collection of postwar jets, I was happy to build it. It was a fun build, and wasn’t frustrating in the least. Try one of these. You’ll like it. Highly recommended.

Thanks to Dave Morrissette and Dick Montgomery of IPMS-USA for the review sample. Thanks also to Dragon-USA for providing the kit, and for a very quick response when one of the parts proved defective and needed immediate replacement. I had the part two days later, and it doesn’t get any better than that. That kind of thing happens from time to time, and the proof is in the quick response.

Thanks, to Dragon Models USA.