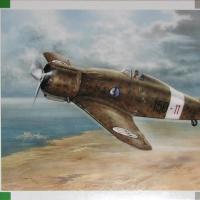 The Fiat G.50 was Italy’s first single-seat, all-metal monoplane with an enclosed cockpit and retractable landing gear. The prototype of the G.50 was first flown in 1937 and introduced into service in 1938. The G.50 served Italy in the Regia Aeronautica (Italian Air force) in the Battle of Britain, in Africa, and in the Aegean theatre, and helped to defend against the invasion of Sicily. They also served in the Aviazione Legionaria (Italian Expeditionary Force) in Spain. 35 were flown to Finland and served in the two Finnish wars against the Soviets. Although fairly quick (max speed was 292mph) and maneuverable, it was lightly armed with just two 12.7mm Breda-SAFAT machine guns in the cowl.

Upon opening the box, you are presented with 4 sprues of grey and 2 small sprues of clear injected molded plastic, 1 fret of photo etch parts, a bag of resin parts, a small clear film, a decal sheet, and an instruction book. The injected parts are nice but do have a bit of flash and pin marks on them, and they have heavy – or maybe I should say thick – attachment points to the sprue. You need to do a bit of cleaning up. The resin parts are pretty crisp but also have a bit of flash on them. The PE is nice, not too thick or thin, easy to work with. Decals are in register and very nicely printed.

Ahh, it all begins with…THE COCKPIT!!! Steps 1-7 deal with this, and you have a nicely detailed pit for this kit that includes about 50 pieces (resin, PE, and injected). There are a few issues here, and hopefully I can explain them without confusing you.

Step 8, and it is time to put the fuselage together, and this went well with no problems. So far, the overall build has been pretty easy for a limited run kit, and I had no major complaints.

Steps 9-11 deal with the tail, stabilizers, and wings. I ran into a minor problem with the wings. There are holes in the leading edge for the pitot tubes and lights. When I linee the wings up, the hole were off just a bit, an easy fix but something to watch for. The stabilizers and rudder went together and fit well, but the wing sat a little lower than it should, leaving the area at the wing root with a ledge. I sanded both of the areas that made contact and that helped. I was also left with a small gap on the rear underside of the wing/fuselage joint, which a shim and some filler fixed easily. The horizontal stabilizers sat too far forward, and to correct this I made the opening for the tab a little bigger and sanded the leading edge just a bit.

Step 12 is for the engine, and what an engine! All told, there are 58 pieces for the engine (30 resin and 28 .3mm X 8mm wires that you have to make). I know it sounds like a lot, but it was fairly easy and went together rather painlessly and looks outstanding! The only things lacking are the ignition wires, but with some fine wire, they can be added pretty easy if the builder thinks it necessary.

Step 13 is the cowling assembly, and that’s where I needed some therapy after finishing. The engine and exhaust need to be placed in the cowl before attaching the two halves. Really easy, no problem so far, right? That’s when the fun really began, because I had to add the very small bumps on the outside of the cowling! Yep, beautiful resin bumps, 28 of them to be exact, and it gave me a slight headache! I should say placing them was the easy part (due to there being engraved marks to guide me), while removing them from the plug and cleanup was a nightmare for me.

Steps 14-16 deal with the wheels, struts, and propeller. The wheels and struts were basic, simple, and went together easy – the props, not so much. 7 pieces make up the prop and spinner, and there is a good deal of flash that needs cleaning up. When removing the blades from the sprue, I accidentally cut the tab that sets into the hub. I thought it would be bad, but actually it fit better when I used some Evergreen rod and I ended up replacing all three tabs. One interesting item about the prop assembly is that there is a hole in the hub, spinner, and engine for the propeller shaft, but there is no propeller shaft included in the kit or shown on the instructions. I made one out of sprue and this worked fine for me.

Steps 17 & 18 deal with attaching the cowl/engine, prop, and tail wheel, and adding the final bits. The engine, when attached, was angled upward, so a bit of sanding was done on the lower part of the firewall to fix this. The MG barrels are nicely detailed resin pieces but I did have a small issue with the shrouds. There are two indentations on the fuselage for small bumps on the contact side of the shrouds. They did not set just right on my kit and were too far back, so it left a gap between the shroud and the barrel; a swipe with a sanding stick fixed that. The intake is a nicely cast resin piece, but be aware that you do not get a sand filter in this kit, so you will have to pick up an aftermarket or scratchbuild one. The tail wheel was a big problem for me as there are no holes in the wheel and the strut had flash that looked like axles. I removed the flash but the wheel just would not set right, so I drilled out the wheel and added an axle and carefully drilled out the strut. Yes, it was a pain, but it worked and I liked the results. As far as the pitot tubes, counterweights, and lights go, I would recommend replacing the pitot tubes since they look a bit too thick to me; the counterweights look nice and went on easily, and the lights, although very small, were pretty easy to deal with. The canopy did not want to sit right due to the gun sight, and I’m still not sure if it was the kit or me, so I used a bit of white glue to help with the gap on the windscreen.

I used Testors enamels for this. The interior is Pale Green with a little white mixed in, the exterior is USMC Green, Italian Sand, and Italian Blue Grey, and the prop and spinner were a mix of RLM 76, White, and Aluminum. You are given markings for 4 aircraft, all in different schemes. I chose the simplest of the four (152a Squadriglia, 20 Gruppo Autonomo C.T., Martuba Airbase, Libya, May 1941) as I actually had a picture of a G.50 in this scheme. The decals went on well without any solvent and sat down nicely.

Although not the easiest kit to build, it’s not that bad either. I would recommend this kit to experienced modelers, especially if you are a fan of Italian aircraft.

I would like to thank Special Hobby for making this kit, MPM for supplying it, the IPMS review corps for letting me build it, and all of you for reading it.

Fit of horizontal stab before fix