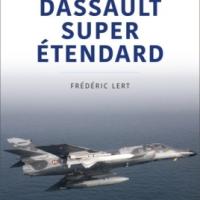 The Dassault Super Étendard, which became the Super Étendard Modernisé in due course, had a remarkable career. It was a humble aircraft that was often faced with thankless and difficult tasks. There was no excessive power in this aircraft, but simply a remarkable versatility that made it the backbone of French carrier aviation for 40 years. Solid, reliable, well-designed, and adaptable, the Super Étendard was an aircraft that France regularly upgraded, enabling it to maintain its rank with increasingly sophisticated equipment and armaments. It gained notoriety for its role in anti-ship missions flown by Argentinian pilots, but paradoxically, France never used it in combat in this role. On the other hand, the aircraft was extensively used as a bomber in numerous wars, in a variety of places, including Lebanon, Syria, Yugoslavia, and Afghanistan. With over 160 images, this book looks at the history of the Super Étendard and the impact it had on aviation.

Chapter 1 - A Birth Full of Mysteres

Here the history of the development of the Super Etendard is covered. The Etendard was first created in 1956 at the request of the French Air Force which was seeking a light attack aircraft. The prototype was powered by two 1,000 kg thrust engines. Ultimately the design was not accepted. However the aircraft manufacturer had also developed a single engine aircraft at the same time, called the Etendard IV. The Étendard would serve as the basis for the more advanced Dassault-Breguet Super Étendard. During the 1970s, it had been intended to replace the Étendard IV with a navalised version of the SEPECAT Jaguar, designated as the Jaguar M. However, development of the Jaguar M was terminated and, shortly after, it was announced that the Super Étendard had been ordered in its place. Ultimately 85 Super Etendards were manufactured.

There were two other contenders in the competition. The Douglas A-4M and the Ling Temco-Vought A-7 Corsair II. The A-4 was out of production, and the only source would be second-hand aircraft which lacked appeal for the French. The A-4 was then ruled out. The A-7 could not launch or land on the French aircraft carriers with a full weapons load or a full fuel load, and was therefore also ruled out.

Most of the images in this chapter are black and white photos.

Chapter 2 - The Super Etendard in Service

The Super Etendard entered service with the French Navy on June 28, 1978 with the arrival of the first aircraft. It took one year to receive the full compliment of 12 aircraft, with production providing one Super Etendard per month. Upgrades to the airframe, avionics and weapons are also addressed.

This chapter is closed with the history of the French Navy's experience with night operations covering the use of night vision goggles, radar, and high performance navigation systems. This process began in 1969-1970 and culminated with perfected night operation capabilities by the late 1980's.

Images are full color. There are several nice pictures of the Super Etendard alongside Rafales in flight and on deck.

Chapter 3 - The Aircraft and Its Missions

The Super Etendard is a small aircraft which in turn limited its capabilities. This chapter details those capabilities and how the French Navy adapted to make the best use of the aircraft. The types of weapons used is covered, as well as the ejection seats used in the aircraft. As more sophisticated weapons came into use the Super Etendard was modified to accept those systems.

The arming of the Super Etendard with the AM39 Exocet anti-ship missile created the perfect couple. The Exocet was developed and deployed to overcome the modern warships' upgraded ship-to-air missile and close range artillery defenses. A good portion of this chapter is dedicated to the development of the airborne Exocet as used by the French Naval Air Force.

Concluding this chapter are several pages that discuss the training and application of nuclear bombs to be carried by the Super Etendard. Pilot training for the use of the nuclear weapon is covered and makes an interesting read.

This chapter includes many fine all color photos of the Super Etendard in flight and on deck as well as many detail shots of weapons and aircraft close ups.

Chapter 4 - The War of the Super Etendard

The Super Etendard was engaged in combat early in its career from Lebanon and later to Libya to Iraq and Syria. Super Etendards flew thousands of missions without a loss of any aircraft. During the campaign in Lebanon French aircraft flew from the French aircraft carriers Foch and Clemenceau.

In 1987-88 French naval forces were sent to the Arabian Sea to ensure the safety of merchant vessels during the Iran-Iraq wars.

In the early '90's and again later in that decade French forces were involved in Yugoslavia and Kosovo with bombing campaigns against the Serbs. During the later campaign the French naval forces were recognized for having the best scores in NATO with 78% of the bombs on target.

The Super Etendards were on board the aircraft carrier Charles de Gaulle during the early phases of the combat in Afghanistan. The performance and capabilities of the land-based Super Etendard was degraded due to the altitude and summer temperatures at the airbase at Kandahar.

Operation Harmattan was the name given to the French intervention in Libya in March 2011. The Super Etendard flew alongside Rafale M's and the Grumman Hawkeye. This operation demonstrated the operational flexibility of the Super Etendard.

The last of the Mid-East missions for the Super Etendard was the operation against the Islamic State in Iraq and Syria. By 2015 the Super Etendard was approaching the end of its life. Up until that time French pilots often referred to the aircraft as a "Swiss Army Knife" based on its capabilities and flexibility.

This chapter includes many fine all color photos of the Super Etendard in flight and on deck as well as many detail shots of weapons and aircraft close ups.

Chapter 5 - The Super Etendard and the Antipodes

Here the activities with the Argentine and Iraqi air forces is addressed. Apart from these two nations efforts to export the Super Etendard were not a success. Combat missions with these two countries are covered here. Probably the most memorable mission was the attack and sinking of the HMS Sheffield by an Argentine Air Force Super Etendard using an Exocet missile.

The Iraqi's received five aircraft on loan from France. One was lost is an accident and the remainder were eventually returned with very little flight time per month recorded. The author made no effort to flatter the expertise of the Iraqi Air Force pilots.

I have always like the looks of the Super Etendard. Simple and sleek lines: a perfect pallet for some interesting paint and camouflage schemes. I had built the Kinetic Super Etendard many years ago, and it currently resides in my main display case. I wish I had this publication when I was building that kit for its many full color photographs and for the detail included therein.

This publication will make a very nice and informative addition to anyone's reference library. Highly recommended.

My thanks to Casement Publications and IPMS/USA for the opportunity to review this publications.