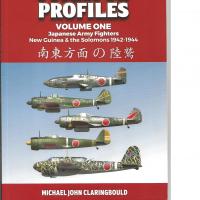 The author spent his early years in the 1960s in New Guinea becoming fascinated with the many WWII aircraft wreck in the area. The book documents as accurately as possible the colors and markings of the various units in and around the Solomons and New Guinea in 1942-44. The book is broken down into 16 chapters along with an introduction, postscript, sources and acknowledgements, and index of names.

Each chapter has a brief history of the unit and aircraft used followed by a section describing the markings and colors used by the unit. The book is profusely illustrated with color profiles of each unit covered offering lots of inspiration and choices for the modeler, even captured test aircraft. Along with the many B&W photos are a few rare wartime and shortly post war color photos.

The book is well written and easy and enjoyable to read. The author is very knowledgeable on the subject and able to convey that knowledge to his readers. I can strongly recommend this book to anyone with an interest in the IJAAF, the war in the South Pacific and aviation history and as previously stated the modeler will find lots of inspiration and colorful schemes to build!