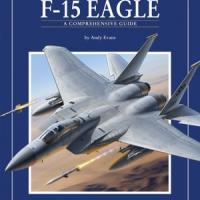 Andy Evans is a full-time author who has contributed to several magazines including Aircraft Illustrated, Air World International and Military Magazine. His previous books include BAe/McDonnell Douglas Harrier [Crowood 1998].

Here the author begins with a page of terms associated with the F-15. Many are familiar, while other are new to me.

The intro pages are essentially a recap of the F-15 features, series, weapons and brief combat history.

Chapter 1 Flight of the Eagle

This chapter reviews the developmental history of the F-15 beginning with the F-X (Flighter-Experimental) Project. Several in-flight images of the First F-15A model and included. It was interesting to note the F-15 project included no prototype aircraft: The F-15 was ordered off the drawing board.

Chapter 2 Wings of the Eagle

Here we see the aircraft from the F-15A series to the F-15D. And again the pages include several, full-color images of the aircraft, with one especially striking in-flight photo on page 23. Detailed combat histories are included.

Initially the F-15 was classied as an air superiority fighter. In the late 1970 McDonnell Douglas and Hughes Aircraft collaborated on a privately funded project to develop an air-to-ground capable aircraft. The F-15E Strike Eagle was the result.

The various nations that currently fly the F-15 are detailed in this chapter, and again the pages offer several full-color photos, with many close-up views of weapons and airframe details.

Here we have special versions and color schemes such as the tri-color F-15S/MTD in flight and on static display. There are six pages of color profiles for USAF, Israeli, Royal Saudi and Singapore Air Force F-15's. Each profile include the paint FS numbers used for the camouflage schemes.

This chapter covers various F-15 scale models built by modelers such as Alan Kelly, Jos Jansen, Dawid Branski, Danumurthi Mahendra, Toby Knight, Mario Serelle, Pascal Klasen, and Christian Gerard. I was not familiar with the names of these modelers, but the skills reflected in their builds of the F-15's in various scales by various manufacturers is noteworthy. Very inspirational work that adds to the value of having this publication in any reference library. .

The first build featured is the 1/48th scale Academy F-15C/D by Alan Kelly. This model is finished using the Two Bobs aggressor decals. The article features detailed views of the various components. Although Alan notes the Academy kit is not without its challenges it is very nicely done and has a striking paint scheme, a real tribute to this modeler's skill.

The next model is the Tamiya F-15C in 1/48th scale by Jos Janson and is finished using various decals. The builder's comments are lmited to the paints and finishing techniques use. Another very nice build.

Next we have a 1/48th scale Revell F-15E Strike Eagle by Dawid Branski. Dawid begins his build with the removal of the raised seam on the clear canopy, followed by the necessary polishing to remove scratches. Dawid continues with the build offering a good deal of information on painting and weathering his model. The result is another striking model (no pun intended)

A 1/48th scale Revell F-15E is detailed by Toby Knight. Several aftermarket accessories are incorporated into the build, along with applications of various paints and weathering techniques.

Next we have Mario Serelle walking us through his build of the 1/72nd scale F-15I Ra'am by Great Wall Hobby. The use of a black primer base and marbeling is shown, resulting in another stunning build. Several details are included in the photos.

The 1/48th scale Hasegawa F-15D is detailed next by Pascal Klasen. Once again the builder describes methods and materials used for another fine build.

This chapter delivers on its title. The many close up images will be found by scale modelers as very useful. Exhausts, wheels and landing gear, underwing stores and weapons, ejection seat, cockpit, the Vulcan cannon port and Remove Before Flight streamers placement are featured. Each photo is numbered including a brief description is also noted. The close-up views are very informative and useful.

Several line diagrams with explanatory notes are illustrated in this chapter.

Each F-15 variant is shown here with a brief description of each.

Model kits, decals and accessories are listed here. This chapter will be very helpful in preparing a shopping list for added accesories for any F-15 model project.

After seeing all the excellent images of Eagles in the preceeding chapters the author closes with many additional images with several depicting various camouflage schemes.

All the images in this publication are full color, with the exception of the line drawings and the technical information included in Appendix II Technical Diagrams. Many of the up close images show details and colors that will be valuable to the modeler interested in detailing their F-15 models. These color images really add to the appeal of this book.

This is an excellent reference for the scale modeler, and is one you will not want to loan to any one of your modeling friends with the risk of never getting it back. I have the old Tamiya F-15C, the Hasegawa F-15E and the Great Wall Hobby F-15B/D that will be built and detailed using this publication as a reference.

My thanks to MA Publications and IPMS/USA for the opportunity to review this publication. This is a real gem for any modeler's reference library. Very highly recommended.