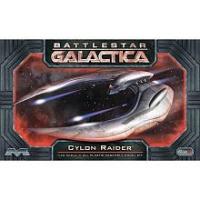 If you are as old as I, you remember the original Battlestar Gallactica series with Lorne Green and Dirk Benedict. Well, when the Sci-Fi Channel reimagined the Battlestar Gallactica series, there were some changes that upset some potential fans, myself included. One was that Starbuck, Benedict’s character, was now a woman and that was just the beginning. I didn’t watch the series when it first came out and now I regret it. I’ve since bought the series on DVD and have taken a liking to it. If you can just forget the old series, and it is easy to do, then you will absolutely love the new series.

As in the first series, some of the key vehicles are the Vipers and the Cylon Raider. Moebius Models has taken on the task of modeling the new space ships. The Cylon Raider is an homage to the original and to the original toasters with red eyes. The kit is molded on three sprues of light grey plastic with minimal flash. The pour gates are a little large but they do not detract from the kit if you remove the parts carefully. A clear sprue provides the Plasma Emitter, optic scanner lens, as well as the display stand. There are no decals, as none are needed.

I loved the instructions. They are clipped at the corners just like the intelligent briefs in the series. Even the heading says it is from Colonial Fleet Headquarters. A nice touch.

The model itself is a breeze to assemble. If you are looking for a challenging kit, this is probably not for you. If you want a model that looks just like the ones on the show, keep on reading.

The parts breakdown is quite simple. I broke it down into four subassemblies to facilitate painting, but you could literally assemble the whole kit and paint it. Assembly starts with the control unit that houses the optic sensor. The hardest part about this is the removal of the part from the pour stubs. I left off the scanner until final assembly.

The engines and rear thrusters are simple enough but care must be taken not to remove the locating stubs on the end. They can be easily removed if you think they are part of the pour gate. Even if you do sand them off, the exhausts are easy enough to center up. The Plasma Emitters are clear parts inside the engine. I added a drop of Tamiya Clear Orange. These would look really cool as LEDs. I painted the inside of the housing flat black to prevent seeing bare plastic.

The main fuselage consists of three parts, upper fuselage and left and right lower halves. The fit is okay, but I elected to fill the resulting gap in with Apoxy Sculpt. This was perfect to smooth the parts together. I’m not sure that it would detract from the model if you didn’t do this smoothing, but I elected to do it.

On the exterior details, I did note that Part 14 and 15 (side thrusters) were labeled backwards. There is only one way to add them to the fuselage, so really you can’t get it wrong.

That was it. I was ready to paint now. I washed the model in a grease cutting detergent and wiped with Polly-S Plastic Prep. The model was primed in Alclad grey primer. Any blemishes were taken care of and the model reprimed.

Prior to adding color to the kit, I started the weathering process with pre-shading of black, white, red, and brown in random patterns and on various panels. This would show through slightly later. I thought it was worth the effort.

I used Alclad Dark Aluminum as the main color to bring out the dark metallic look of the real thing. I then masked off the dark areas and sprayed them with Alclad Magnesium. The guns and side thrusters were sprayed with Model Master Titanium. The guns were polished with some Mig Pigment Gun Metal powder and set aside. That was all the color that was added. These toasters were made by machines for machines and as such didn’t need to be painted.

The weathering would make this model look even cooler. I started out with Mig Pigments such as Black Smoke, European Earth, and Faded Panzer Grey. These were applied and blended to give the dirty patchy look of the ‘real’ thing. Once I was happy, I did go back in a random pattern of Tamiya Smoke to provide some nearly transparent weathering. After that, there wasn’t much I could do. I loved the dirty patchy look of the model. I wanted to add more but I forced myself to stop the weathering process.

The top ‘cockpit’ sub-section was added. The ‘eye’ was brush painted with Tamiya Clear Smoke on the backside. A dot of white was applied with a toothpick to the outside lens. This was followed up with a dot of Tamiya Clear Red to give the luminescence of the eye.

I must admit I couldn’t think of an attractive way to paint up the base piece as this is a ‘curbside’ model with no landing gear. I figured that I could do it another time. The base was simply added to the bottom of the model and that was it, model done

The model was literally assembled in one night. The smoothing of the fuselage parts took the longest time. I really enjoyed the simplicity of the model. It captures the look of what you see on the show. I thoroughly enjoyed the model and isn’t that what we build models for? I think the only thing that could make this model more fun is LED lighting for the eye and engines.

Highly frackin’ recommended, especially for the geek in all of us.

Thanks to Moebius Models and IPMS/USA for the review copy. You can get your copy directly from Moebius at www.moebiusmodels.com or at your local hobby shop, or online retailer.