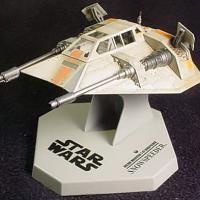 Eighty-three parts, including those for the two pilot figures and the display base, are located on the five part sprues. The glazing for the canopy consists of two clear parts. The canopy framing consists of two parts into which the glazing fits. The parts are, with only a few exceptions, without flash, and are held in place at small attachment points that will require very little clean up.

The instructions include both Japanese and English text but neither is required. The illustrations are clearly drawn and easy to interpret. Gunze is the paint of choice and all color references are for Gunze products.

The decals are of high quality and are easy to work with. Experienced modelers will probably think the decals are too thick, and they are a bit thicker than what I'm used to working with, but they adhere to the model's surface without any issues. Just for the record, the decals were applied over Gunze Sanyo Acrylic paint. The Gunze was not over sprayed with a flat or glossy coat, just straight Gunze. Solvaset helped to set the decals and they snuggled into their proper location without difficulty or damage being done by the handling required to locate them properly.

Pay attention to decal # 14. This decal is the "anti-glare" panel on the forward area in front of the windscreen. The decal is printed in a single piece and it crosses the separation line between the airframe and the canopy. If the canopy is displayed in the open position, or if the hinge mechanism will be employed to raise or lower the canopy then decal #14 will need to be cut in two parts. It's a simple task to measure it and cut it before one soaks it and tries to apply it to the airframe.

There are just a few things that need special attention when assembling this model. When assembling the parts for the air braking flaps (B39, B41, B15) and (B40, B42, B16) be aware that the parts are specific to the port or starboard side of the vehicle. The locating pins on both sets of support arms used to attach the air braking flaps and support arms to the gun breech subassemblies are different diameters.

The gun barrels, two parts labeled as "B49" will need some attention. Flash along the length of both barrels will need to be removed. Some clean up on the mantlet pieces, part numbers B32 and B36 is also required. Additionally, the blast deflectors, parts B43 and B44, will require some sanding along the seam line where the parts are attached. Both gun breaches, two parts B-18 should be inspected carefully. I found a mold line along both sides of the breaches.

It is important to make a decision regarding the painting process early in the construction phase of this project. The question that you need to ask yourself is, "do I want to assemble and attach the canopy and glazing before I paint, or do I want to paint the parts prior to assembly?" If the former, you will need to mask the glazing so as not to slosh it with paint when airbrushing. If the later, then it is very important to read the next paragraph.

In order to save yourself much trouble, when assembling and then attaching the cannon breeches parts B3, B6, and B21 for the port side, and parts B4, B5, and B22 for the starboard side, it is essential that you only glue one or the other of these subassemblies into its final position. It does not matter which one is glued into place as long as the other breech is left loose. If you glue both into place before inserting the back canopy frame, C2, you will find that C2 cannot be made to fit into the correct position. The solution is simple. Both gun breeches fit so tightly and so well that they can be snapped into place without glue. Snap, or glue, one of the breeches into place, insert the rear canopy frame without gluing it into position (remember you will need to remove it and insert the glazing after painting the model), and then snap part B28 into place followed by the remaining breech subassembly. You are now free to paint the model with these parts in their final positions and when done, can remove the breech that was snapped (not glued!) into position, removing B28 and the back canopy frame as well. Insert the glazing, reassemble everything, this time with glue, and you've saved yourself the trouble of masking the glazed portions of the canopy. It's much easier than it sounds.

The interior is nicely appointed and is clearly visible through the glazing. Highlighting the instrument panels and picking out the various knobs and levers on those panels is a simple task.

Two figures are provided, one for the pilot and one for the G.I.B. The torso and legs are identical on both figures. Only the hands are different with one set gripping control handles and the other gripping a "yoke". The molding on the figures is not up to the standard set by the remainder of the model.

Not much of an issue, but the English labeling on the decal sheet identifies it as 1/72nd scale. Rest assured that the decals actually fit the 1/48th kit.

Two sink marks appear in a most unfortunate location. They are on the trailing edge of part A1. That part is the upper fuselage component. These sink marks are located precisely where the lower air brake covers are to be attached, and will be very visible.

The gluing surface for the canopy hinge is very small and it is easy to get glue on the hinge pins. Exercise care when assembling the canopy pieces if you wish to use the hinge feature.

There are no seat belts or shoulder harness parts or decals.

The kit features excellent molding, or should one say, "Fine Mold"ing, with very little flash and few sink marks. Part B-17, the radiator located on the "tail" of the spacecraft is very well done, with space between the blades as if they were separate pieces.

Markings for two squadrons are provided. The decals are intricate in appearance and quite numerous. More importantly, the decals presented no real issues and set to the model with ease.

The parts fit very well and, in fact, I used no glue on one weapon breech and both barrel supports. They simply snapped into place with very slight pressure.

This is an excellent model. It is simple enough for beginners and detailed sufficiently for those with more experience or who wish to go beyond the parts in the box and do some super-detailing. This Fine Molds kit is highly recommended.