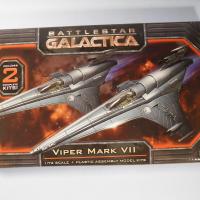 When they revamped Battlestar Galactica in 2003 they revamped many of the ships including the Viper fighters. They were retiring the Mk II as the new Mk VII was in service. Unfortunately, the Cylons had a way to disrupt the newer fighters rendering them powerless so the Mk II fighters had to be brought back into service to carry the fight. Later in the series the Mk VIIs were able to rejoin their earlier cousins and combat the Cylon tyranny.

Moebius brought out very nicely detailed 1/32nd scale kits of both Viper versions as well as the new Cylon Raider but these kits didn’t really fit in with my collection of 72nd scale fighters so I was very excited to see them release new kits of all 3 of these fighters in my scale and to make things better, you get 2 kits in each box. This review focus’ on the newest kit, the Viper Mark VIIs.

The new kit comes with 52 white plastic parts and 6 clear parts which includes the 2-piece standard Moebius stand, enough for two complete fighters. The finished models are just over 5 inches long. There is a very tiny bit of flash but nothing to worry about.

The cockpit isn’t as detailed as it’s bigger cousin but in this scale it is enough though I would have liked a few more decals for the instrument panel. The one small one just doesn’t do it. But a nice touch is the No Step decal that goes on the instrument panel coaming. There are also two shoulder patches for the pilot. These are extremely small.

One area Moebius could really improve is their painting instructions. The only mention for the pilot is Iridescent Green so on to the internet to look up Viper pilot costumes. Luckily there are lots of pictures to help guide you. I used a mix of Tamiya XF-58 Olive Green and X-12 Gold Leaf which seems to match pretty well. The vest is tan with some black straps and the helmet is Aluminum. The faceplate is part of the helmet so no clear part to see the pilots face. I used a little Tamiya Smoke over the aluminum to give a little variation.

Once the cockpit is together the rest of the craft builds up very quickly. There are some slight gaps on the belly where the main fuselage parts come together but I used a little Tulip fabric paint to fill them and left the engines off to make them easier to paint and easier to paint the fighter. While the instruction just advises you to paint it Gray a little research shows the props were painted Pontiac Engine Blue. I was unable to track down this color so I went with what the ships looked like on screen. Model Master FS 35164 Intermediate Blue (1920) fits the bill pretty good. A wash with some Vallejo Black, add the engines and the few decals and you are ready to chase Toasters.

You do get the option of posing them either in flight or landed. The landing gear is presented with just 3 parts and while they look ok compared to what I can find online from the show; they are not very close to what the full sized prop used. I plan to do the second kit in landed configuration but did take a pic with the landing gear on to give you an idea.

I have now built one of each of the 72nd scale kits and this one is the second easiest to build with the Cylon being the winner in the quick build contest. While the price is a little high you do get 2 full kits so wouldn’t take long to get a Viper squadron in battle.

Get that Toaster
Previous Next