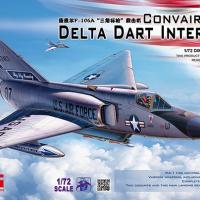 With the popularity of the MENG F-102 kit, it was a given that a 106 would be coming down the pike soon. When it was announced, there was a lot of fanfare and anticipation in the new offering. Being a fan of the century series, it was also natural that I would pick one up to see what it offered. The 102 was far from a “perfect” build for me and I was hoping that MENG learned their lessons from the past and integrated improvements into the “six”.

Upon inspecting the sprues I found a lot of improvements over the previous 102 offering. Cockpits had a much greater detail (molded in seatbelts, etc.) as well as parts to build both types of panel and ejection seats. A PE fret was added with some detail items, and a crew ladder. The radome was now an option, as the radar and front maintenance panels could be displayed open, providing a great static display. These items were well-cast with little flash.

Now on the kit overall. The panel lines were typical MENG, crisp and shallow. With my experience with the 102, I knew putting wash in these would be an exercise to say the least. As we work back towards the business end, I noticed that the spine and vertical stabilizer were separate parts this time, instead of it all being molded into the fuselage, which I felt to be a double-edged sword. This allowed for better alignment, but it also introduced a potential seam where the assembly fits to the fuselage. On the underside, the major change was that the inboard gear doors were now one piece, a drastic improvement from playing the alignment balance game the 102 yielded. For the Boom-Boom Bay, once again MENG offered enough options to make your head spin. AIM missiles, a gun pod, AIR-2 nuke and options to just close it all up, with or without the gun pod. The star is once again the nozzle. MENG really has it together when it comes to the cans. Parts could be painted separately and added later in construction, all crisp and clean.

The other things that MENG took the liberty of doing was adding a trailer for the AIR-2 nuke, intake covers, 2 canopy options, and a few other goodies. For the price, this kit is loaded with options.

I will put a disclaimer out there that during the build, I had several personal issues that popped up that took me away from the bench for long stretches, so the build was strewn about a wide time-frame. Building the cockpit was a joy. There is just enough detail in there to warrant the canopy being open. The only drawback is the gauge decals are nothing more than black dots. Upon seeing this, I just decided to paint the backing of the panel black rather than futz with a decal.

After putting a few hours on the office, I slapped it together inside the fuselage and quickly realized…YOU CAN’T EVEN SEE THE GAUGES! Naturally this is not the fault of the kitmaker, but rather the way the bird was designed from Convair. Don’t stress on that panel too much! Once I began to mate the fuselage to the wings, my first problem surfaced… about a 2mm gap on one up by the intake! I poured and pined over this for 2 or 3 nights, even considered returning the kit. Then I realized that there is a small warp in the fuselage that created this. Copious amounts of cement and some toothpicks later, she sealed up decently.

Due to the issues, I realized I was in a major time crunch and late for this review. I decided that while I wanted to display the bird in maintenance, there was just too many fidgety bits for me to deal with and paint, so I called an audible to close her up. This was also a mistake, as it seemed that the parts were engineered more to remain open and the fit was not the greatest; so not much time was gained by doing so.

The only carryover I noticed from the 102 was the horrible way he vertical stabilizer fits together; instead of being your typical down the middle affair, a smaller section fits into a larger section which creates an inconsistent seam when comparing to the ultra-tight panel lines. It’s minor, but it’s there.

All in all, this kit is a winner. I cannot blame MENG for creating my own issues. However, I will say in the words of Scotty, “The more they complicate the plumbing, the easier it is to stop up the drain.” I think MENG is a huge up-and-comer in the business, but I also think they over-engineer what they are trying to do. They have great products with outstanding design, but fail in the ease of assembly department. Once again I must also take part of that blame on myself for taking so long when the frustration points mounted.

I want to express my sincere thank you to IPMS USA and Stevens Hobby for the opportunity to review this kit.