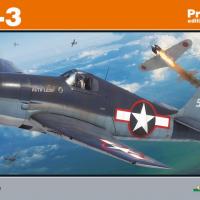 The Grumman F6F-3 Hellcat was a US carrier based fighter that served with distinction throughout the Pacific War.

This kit has been issued several times with different markings. It is packaged like other Eduard kits in a strong top opening box with the parts contained in a plastic bag with the photoetch, decals, and instruction manual protected in the bottom of the box. Resin wheels are a nice addition.

Curiously there were two fuselage sprues, although there is no reference to one of them. The part numbers were different as was the sprue number. I put it aside and continued on.

Construction starts with the cockpit. It appears a bit simplistic at first, but with the supplied photo etch, decals, and painting, the cockpit came out looking quite good. I used Eduard’s Look instrument panel and steel seat belts, which saved time.

While the cockpit and fuselage sides were drying, I turned my attention to the wings and main landing gear. The wings went together well. Before closing the wings, I inserted the parts that contain the gun barrels. If I build another Hellcat, I will remove the barrels and install them later. I accidentally broke off and lost a couple of barrels during the build and I will replace all of them with Master Model brass barrels.

As the underside of the aircraft is white, I built the main landing gear and attached them in the undercarriage bays. This proved to be the most involved assembly of the whole model. Nothing difficult, just some mold seam clean up and lots of parts. The completed undercarriage legs slotted firmly into the bays and lined up perfectly.

The fuselage is glued together trapping the cockpit and tail wheel. Don’t forget to open the slot for the centerline external fuel tank if it is used. All marking options except one uses the tank. Care is needed when sanding the seams as the fuselage features “overlapped” panels like the real aircraft. I sanded each panel separately, and scribed any that I damaged.

The completed wings and tail planes slide snuggly into deep depressions in the fuselage sides which aid alignment beautifully! A quick swipe with Tamiya liquid putty was all I needed to fill some very small gaps.

The radial engine was tackled next. I painted the various parts first, then installed the photoetch ignition harness. This is very fine and fragile, and I broke a few while handling it. The three-piece nose cowling fit together fine. I removed two large ejector pin stubs from the inside of the side cowls. There is a photoetch carburetor intake screen that fits inside the lower cowl. The instructions call for the color to be aluminum, so I left if off until the end of the build. The numerous exhaust pipe stub ends were drilled out and put aside to be added later.

I understand all control surfaces were spring loaded, so I glued these on in the neutral position. My model suddenly looked like a Hellcat!

The windscreen, landing and position lights were attached. The wing tip position lights didn’t fit well - something I have found with every Eduard kit I have built. I super glued them in place, filled gaps and sanded them to conform to the surrounding wing. These were then masked off with the supplied masks. I also masked both sliding canopies: one for a closed cockpit and one for it open.

The resin wheels were carefully removed from their pour stubs. They have lovely tread and side wall details, including the “Firestone” brand name. Paint masks are provided for the wheels.

I prepared all the parts for a multi-part painting session. Choosing to do option “D”, I painted white, then intermediate blue ending with sea blue. Once I was happy with the paint job, I applied several gloss coats to seal the paint and bring out the decals.

There are 5 marking options, and while I liked most of them, I decided on the one featuring an unusual white fuselage spine and even more rare (for Navy aircraft) pin-up girl!

The Cartograf decals adhered well and I used MicroSol to help snuggle them into panel lines. I spent some time with the fuselage star insignias to make sure they conformed to the lapped panel sides. The stencil sheet was separate, and most were readable. I noted “water” was spelt with two “T’s”. I appreciated the stencil placement diagram in the instruction manual that clearly showed were every stencil was to be placed and what it was, as all but three had a different letter references. This meant I had to search the sheet for the correct decals to use. I wrote the corresponding letter on the diagram. See the attached picture. In the end all were found. After I was happy that I didn’t have any silvering, I shot a couple more gloss coats to seal the decals.

I weathered the aircraft with a panel line wash, dirt and oil streaks, and then flat coated everything.

The F6F was completed by adding the engine, exhaust pipes, nose cowling, sliding canopy, drop tank, and all the “breakable” items, like Pitot tube and antennas. The drop tank had photo etch straps that I added last.

This was a fun model and quite straight forward to build. There were no major mold alignment problems, and most parts fit very nicely.

This F6F Hellcat could be built by most modelers, but some experience with photoetch would be helpful.

Thank you Eduard for the review sample and IPMS USA for allowing me to build and review this great model.